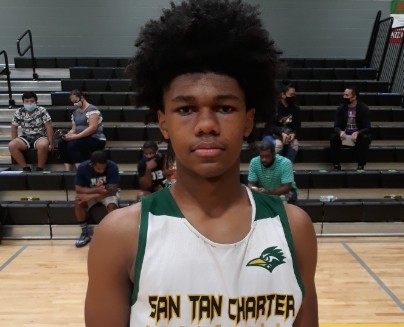 Last week, Arizona Preps Senior Editor Anthony Ray and myself were invited to San Tan Charter School in Gilbert, AZ, to watch a game between Olympia (WA) and San Tan Charter. The game was refreshing to see, since it gave us a preview of what is in store for the Roadrunners of San Tan Charter. Olympia (WA) edged San Tan Charter 35 to 27 in a defensive battle. Both squads were well coached, as Olympia went on a small run with about 5 minutes left in the 2nd half to pull away.

San Tan Charter is led by 2021 6-foot combo-guard Demetrus Johnson II (pictured) who currently has three Division-I offers in Jackson State, Grambling and Mississippi Valley State. Demetrus can play both the point guard and scoring guard positions well. He has elite vision and decision-making skills. His best attribute is his ability to penetrate defenses and either score, or put teammates in a position to score. He will be a match-up nightmare for 2A opponents this up-coming season.

The final score doesn’t tell the whole story, as Olympia High School (WA) had a pretty good team with a lot of athleticism and size.

Their top prospect was 2023 6-foot-1 sophomore point guard Parker Gerrits. Parker showed an amazing ability to break down defenders with his penetrating skill-set. He displayed multiple ways he could hurt the defense, by dishing the ball and scoring in multiple ways.

My final take is Coach Derek Freeman (San Tan Charter School) has done an amazing job with his program. His team won the state championship in the CAA Division-III, which, in my opinion, was the toughest division in the CAA last season. San Tan Charter will pose a match-up nightmare for 2A opponents with their depth, skill, size, and athleticism this future season.