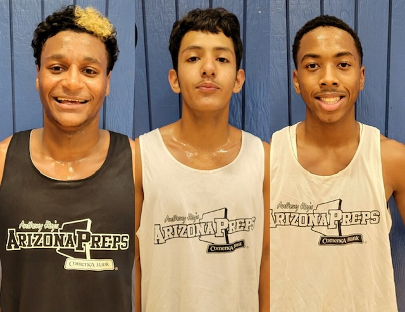 The Arizona Preps' Staff has extended its reach across the state. Western Arizona Preps Scout Leo Scott kick started a tradition for the Western Arizona Community called the Best of the West Showcase. The purpose of the event is to provide exposure to regional scouts to assist with college recruitment. The event drew prospects from Parker, Bullhead City, Salome and Peach Springs in Arizona and Blythe, California. Here are some of top performers who caught my eye on the day . . .

McCoo is a great looking prospect who will become a solid college post prospect. This young man has a solid platform as he is athletic and strong. He runs the floor well and finishes above the rim strong. Don’t sleep on his shooting ability, as he displayed he can hit the open three and mid range. Defensively he is a force inside and a shot-blocking machine. McCoo is set to have a big season his senior year and I anticipate colleges to get involved in his recruitment, as his stock is rising.

One part of the dynamic backcourt duo from Salome High School. Calderon is extremely skilled with his ball handling, IQ and three level scoring ability. I love the way he uses the pick and roll to attack defenses as he is a solid facilitator and scoring threat. Defensively he is quick with active hands with a niche for picking opposing guards pockets. Calderon thrives in both the half court and transition game. Another solid small college prospect with tremendous upside.

Armstrong is a hidden gem find who is a silent assassin. He is a pure scorer with great range. His game looks quiet, but once you check the stat sheet he can put up 20 points quietly. Armstrong has a nice frame and good strength. He would be another solid small college prospect for a school looking for a reliable scoring guard.

The counterpart of the Salome 1-2 backcourt punch. Calderon is just as skilled as his brother. His game comes off a little quiet, but don’t be fooled as he can go from 0 to 100 really quick. An explosive prospect who makes plays on both ends of the floor.

Perez is a crafty guard who has a nice feel for the game with great IQ. He reads then attacks defenses and is a three level scoring threat. Besides being a prolific scorer he has the ability to find open teammates to dish the ball for open looks. Defensively he is sneaky quick and reads the passing lanes well to pick up steals. Perez can be a nice small college prospect for a college needing a scoring guard with great IQ and feel.

Elliot is an energy player who is athletic and strong. He showed the ability to guard bigger opponents in the post. Elliot has a great motor and works hard. Through his hard work he can fill the stat sheet with rebounds and garbage points. I like his mid range and finishing ability. A blue collared prospect who will have a big season this upcoming winter.