Best In The West Fall League 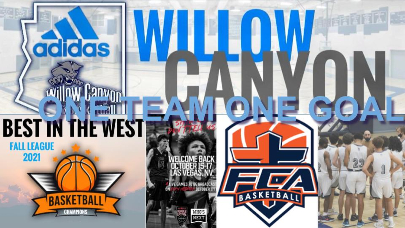 The Best in the West Fall League hosted by Willow Canyon, Desert Edge and Sandra Day O’Connor High Schools kicks off the Arizona Preps Fall Exposure Circuit. The Arizona Preps' Staff will look to uncover, evaluate and promote Arizona’s best basketball talent in this league. This Fall League, organized by Willow Canyon Head Coach Joe Colletti, has been in operation for the last 5 years and has been led by Colletti.

We are pleased to be able to provide coverage to help promote this event this year. There are a total of (31) different Varsity Teams and (20) JV/FROSH Teams participating this year. Some key match-ups looking ahead to week (1) include the following:

Paradise Honors is coming off of a strong 20-3 campaign from last season. The Panthers finished runner up in 4A and return key returnees in seniors Blessing Nwotite, Luke Light, and Jayson Hunt. Pinnacle is historically a strong program in recent years. Coach Charlie Wilde does a phenomenal job. Key players to keep a tab on include Bryce Ford, Asher Raquiza, and Deuce Robinson.

Desert Mountain and Liberty is an intriguing matchup. Coach Mark Schumaker is an excellent motivator and has his teams dig deep on the defensive end. Key players to watch for the Wolves are Easton Reagan and Will Dubuc. Coach Mark Wood does a fantastic job at Liberty, as his teams are always well coached and shoot lights out. His Lions are coming off of a solid 17-3 campaign last season, and return a young core backcourt of Trevor Owens and Davis Hester.

Ironwood and Mesa will be at war, as coaches Jordan Augustine and Scott Stansberry are two of the state’s best coaches. The Eagles finished last season with an 18-3 record and return key players Ringo Aguek, DeOtis Nunn as well as transfer Leonard Romayor. Mesa has a rich tradition, as the Jackrabbits look to build on last season’s success, despite an early playoff exit. Talbot Cummard has been playing at a high level all summer, as he looks to be the leader of the team. Transfer point guard, Kota Benson, is a high level player who has a high IQ and ability to create many opportunities. With the support of Quin Shumway, Conway Cummard, Josh Irish and AJ Seumanu, Jackrabbits are looking to make some noise in 6A this season.

Millennium and Verrado are crosstown region rivals, as the schools are fairly close. Coach Ty Amundsen has built one of the strongest programs out west, as his Tigers always compete at a high level. Key players to watch for the Tigers include Gabe Pickens, Christian Hoolly, and Reggie Orr. Coach Ramon Marks did a fantastic job last season with a young roster. The future looks bright as key prospects Jake Sant, Zaveion Binyard and Marcell Galloway return to help keep the Vipers competitive. The Millennium Tigers are slated to make a deep run into the playoffs and it is exciting to preview their team this fall.

Another intriguing match-up is between Willow Canyon and Imagine Superstition. This is a good measuring stick to see how a smaller Canyon Athletic Association (CAA) member school matches up against a bigger 5A Arizona Interscholastic Association (AIA) School. Coach Joe Colletti has done an amazing job with his program, by building young men of strong character and success on the floor. Coach Colletti’s Wildcats are defending 5A Central Region Champs, and return key players Pike Tancil, David Bright, Bryce Hanson and Xavier Vaughn. They finished with an overall record of 15-3 last season. As a former coach in the CAA, you can never sleep on some of the top programs in the CAA, as they can be just as talented as their AIA counterparts.

The Imagine Storm is historically one of the most talented programs in the CAA. Coach Al Luna has been doing a great job with his programs. His Storm are coming off of a CAA Division-III Final Four finish, led by key returnees Mason Machado, Jacob Karnitz, and transfer Aaron Quinones. Coach Luna does a phenomenal job with his guards and usually his teams have superior guard play. It will be an interesting matchup as Coach Colletti runs an uptempo system.

Overall, all of this Fall League’s games will be fun to cover. Stay tuned to ArizonaPreps.com, our Twitter and Instagram for in depth coverage of the Best in the West Fall League.