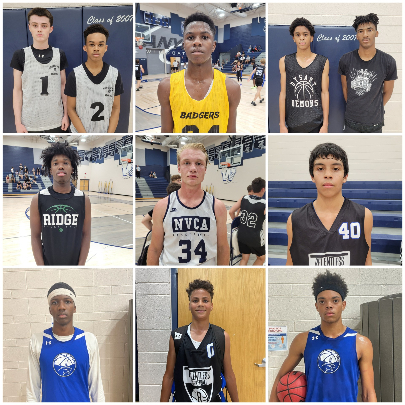 The Best in the West Fall League is one of Arizona’s best kept secrets. Willow Canyon’s Head Coach Joe Colletti and Desert Edge’s Andra Rogers have been running this league for (5) years. The demand for the league has been so high that there are three gym sites hosting this year’s league - Desert Edge, Willow Canyon and Sandra Day O’Connor High Schools.

Week one had some intriguing match-ups, as this league has many Region and State Runner-Ups and State Champions competing this fall. Here is a look at some of the top performers from Week 1’s Willow Canyon site, as observed by Arizona Preps' George Courtney and Tre Howard . . .

One of the prospects that got my attention immediately. He has a great IQ, vision and decision making skills. Cassidy plays with a good feel and impressive maturity for his age. He is an elite point guard that can facilitate as well as create opportunities for himself. A high ceiling and prospect to watch his best years are ahead of him.

My nickname for this young man is the “Diamondback.” Machado can devastate opponents with his lethal offensive striking ability. Machado is one of the best pure shooter/scoring guards in the state. He has great range and is very deadly, if left open. He has a great catch-and-shoot and pull-up ability with a smooth stroke. Besides being a great shooter, he displayed his ability to take it to the rack and finish as well. An under-the-radar prospect that should be garnering more attention in the upcoming months.

Another one of my favorite players to watch compete. He has a great motor on both ends of the ball. He is a scrappy on and off-the-ball defender who never quits. Fuller plays at a great pace and has the IQ to disrupt the opponent's offensive flow. The toughest kid in the gym I saw the entire day.

An athletic combo-guard prospect who is a good facilitator and displayed impressive athleticism and strength. He can score at all three levels and has a solid motor. He gets after it on both ends of the floor. He has a lot of upside and will make a college program better with what he brings to the table.

An impressive on-ball defender with solid athleticism and a motor. He has great anticipation and disrupts the passing lanes well. A scrappy prospect who competes on both ends of the floor. He is a difference maker who has a high ceiling to improve. A nice sleeper prospect for college coaches to get on their radar.

A physical downhill prospect who plays strong inside and rebounds well. He has a great foundation to build on and will have a huge year for his team. With a little bit of development he will be a nice small or power forward for a college program.

A hidden gem find who has the physical tools and ability to be a nice prospect. He is athletic and strong with great range and offensive ability. Ibeh showed his ability to break down defenders and get to the rack almost at will. He showed good range, and if he develops he can possibly be a nice low-major plus prospect.

A tough prospect on the inside with great footwork and rebounding ability. His post moves and finishing ability with a soft touch is what caught my attention. He will have a huge year in helping his team defend their 1A State Title. Marais is a nice small college prospect with good upside.

An athletic guard who is very patient on the offensive end. He waits for plays to develop, which allows him to be a great passer. Nwotite allows the game to come to him, and he is also an above average offensive rebounder. He moves well without the ball and is always at the right place at the right time.

A fundamental big man with good moves in the paint. He does not try to show off, he looks to finish the play. Hunt has strong finishing ability and has a great ceiling if he could become more aggressive. He is an inside presence and cleans the glass on both ends.