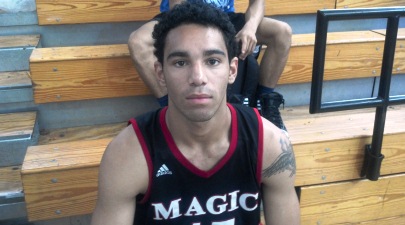 Westview High School's talented 6-foot-5, 200-pound senior forward Isaiah Bellamy had his best game of the season on Thursday night in the first round of the Division-I state playoffs - pouring in 29 points, 8 rebounds and 5 assists in a playoff victory over St. Mary's HS.
Share
Facebook Twitter LinkedIn WhatsApp Pinterest Email

Thursday night set the stage for the first round of this year's Division-I state playoffs across the state, an exciting time of the year for basketball enthusiasts around the state.  For many, it would be the last game of their high school careers, while for others it would be an opportunity to advance in the state playoffs.

I found myself in the West Valley on Thursday evening, taking in a first round match-up between one of the state's elite teams this season, Westview High School, and also one of the state's top programs over time, St. Mary's HS.  Westview (22-6) has had a terrific season thus far under first year head coach Brendan McEvoy, while new head Ty Amundsen has looked to rebuild a Knight's program that has struggled over the past couple years.  Amundsen was terrific as the head coach at Estrella Foothills HS previously.

St. Mary's would have a tall order on Thursday evening to win the game - literally, trying to limit the touches of one of the nation's top-rated unsigned senior post players, 6-foot-9 senior Andre Adams.  The Knights have been led all season by one of the nation's premier young prospects, 6-foot-1 freshman guard Marcus Shaver.

With the focus primarily placed on Adams and Shaver on the evening, another player would steal the show, as 6-foot-5, 200-pound senior forward Isaiah Bellamy would take over the game for Westview.

After a close first period where Westview would lead the Knights 13-11 after the first quarter, Westview would open up the game in the second period after a mid-range jumper from the corner from Bellamy would make the score 19 to 12 with 5:45 left to play in the quarter.

Shaver would try to keep his Knights close after a nice transition layup over Andre Adams.  But Bellamy would come right back with a nice basket inside the paint on the other end, and then tap in a missed shot attempt for another score just before the end to the first half.  Bellamy's outburst would give Westview a 27-14 lead at the half, their biggest lead of the game.

In the third period, Bellamy would pick up right where he left off - scoring a strong left-handed post move around a defender, and then scoring several consecutive times down the floor to give Westview a nice 36-18 lead.  But St. Mary's would go on a 11 to 5 run of their own to close the gap, as Westview would take a 41-29 lead in to the fourth period.

Early in the fourth period, Andre Adams would pick up his fourth foul and head to the bench.  In the absence of Adams, Marcus Shaver would attempt to get his Knights back into it, but after another driving layup by Bellamy, Westview would hold on to a double-digit lead - 48-37 with 3:52 left to play.

Andre Adams would return to the floor with 3 minutes left to play and convert 4-for-4 free-throws from the line after being fouled, but would be called for his fifth foul with 2:04 left to play in the game.  The free-throws by Adams though would be enough to seal the win for Westview, as they would advance to the second round of the state playoffs with a 58-49 victory.

Isaiah Bellamy, who is worthy of a division-I offer, would finish with a game-high 29 points, 8 rebounds and 5 assists in the playoff win.

"He is a division-I player," said Westview HS head coach Brendan McEvoy afetr the game.  "He does it all.  He scores, he defends, he rebounds.  What more does he need to do?"

Recruiting Notes:  Andre Adams was rated by Rivals.com this week as the #2 unsigned post prospect in the country.  Adams is working very hard in the classroom to qualify academically, and believes that he could qualify this spring.  If not, Adams is looking at attending a prep school, although numerous junior colleges are currently pursuing Adams also.  If Adams qualifies, every division-I school in America will be knocking down his door this spring.