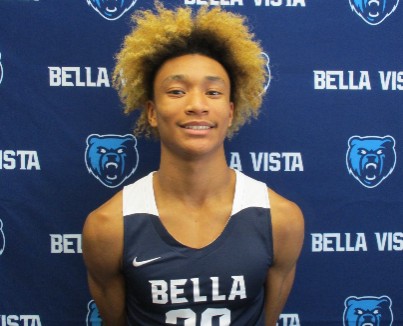 Bella Vista Prep, located in North Scottsdale, is back and on the rise in the state of Arizona, after winning a national championship on the Grind Session just two years ago. Now with Corey Boswell taking over the helm as the Head Coach of the National Program, the program has reloaded and set to have a big season in 2020-2021. One major reason for the projected success of the program this season will be the play of 6-foot-4, 175-pound senior guard Isaac Spears.

Spears is coming off a strong junior season, where he led the team from the point position and helped the program regain form, in what was almost a rebuilding year for the program. Spears showed excellent promise last season, a breakout season for him, and now he is ready to go to another level in his play, and also in his college recruitment, as he is currently one of the most underrated prospects in the state of Arizona - regardless of class and position on the floor.

Currently, Spears has offers for himself from Southeastern Louisiana and Incarnate Word. He is well worthy of much more college recruitment, and should become one of the hotter guard prospects in the West this prep season, as he will lead a loaded prep team of prospects. Bella Vista, which plays on the national Grind Session, is scheduled to play 40+ games this prep season, and against a loaded schedule of teams, which should really benefit Spears, especially once Division-I college coaches are permitted to get back out on the road and see prospects.

A native of Las Vegas, Nevada, Spears is a bigger guard prospect with an excellent feel for the game and a knack for scoring the basketball, while also being able to lead his team. He has a herky-jerky offensive style, which allows him to get defenders off balance - allowing him to get past defenders off the dribble and finish plays in traffic, where he is able to score over and around bigger defenders. He also is a very good shooter of the basketball with range on his shot, which has really opened up his game and will make him very effective offensively this high school season.

Spears is a very good ball handler that can also get to anywhere he wants on the floor, and is able to make plays off the dribble to get himself going, or to open up scoring opportunities for his teammates. He has very good court vision and a nice overall feel, which is a nice asset for him. He pushes the ball up the floor and is good in the open floor, where he is a strong finisher, and is able to make plays. He is also a good rebounder from the guard position, as a result of his good size as a bigger, long and rangy guard prospect. He is a very good defender with quick hands and feet and plays passing lanes.

Spears is currently a very unheralded prospect with loads of potential and upside for the future, and has the potential to come in and play right away for the right college program. I look for him to go to another level this prep season in his play and his college recruitment.