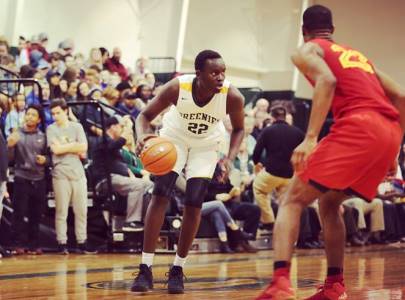 In case you missed it, one of the top available prospects this spring was Bella Vista Prep's 6-foot-8, 215-pound senior wing Girr Ring. After waiting for some time to see his college recruitment take off, Ring has now found a college home for himself.

Recently, Ring gave a verbal commitment to Coppin State University. Ring waited for some time to see his college recruitment develop, but he finally found his fit with the MEAC Conference program. Ring is an absolute steal for Coppin State this late.  He is a very skilled bigger wing prospect that has a high basketball IQ.

Ring was rated by our staff as one of the elite available prospects in the 2018 class late, and worthy of serious recruiting attention.  Ring came to Bella Vista Prep this high school season during the year.  A native of Sudan, Ring is a very talented prospect with loads of potential for the future and a nice overall skill level.

Previously, Ring had numerous scholarship offers on the table for himself from such schools as Ohio State, Florida State, Texas, Kansas State, Texas A&M and Eastern New Mexico.  But the schools each moved on in their decisions to recruit Ring long term, leaving Ring with becoming an unheralded recruit late.

Arizona Hoop Review Scouting Report:  Ring is a very big combo-forward with a nice overall skill level and good overall versatility on the floor.  Capable of playing both forward positions and making plays for himself and others off the dribble.  A good shooter with range on his shot.  Stretches the floor.  A good ballhandler and passer, that is capable of handling the ball in the open floor very well.  A good rebounder that rebounds outside of his area.  Runs the floor very well.  A nice sleeper prospect and a steal this spring.