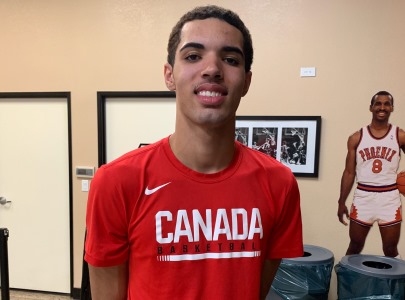 One of the elite prospects in America's 2020 Class is Bella Vista Prep's 6-foot-7, 195-pound rising senior guard/forward Addison Patterson. A native of Milton, Canada, Patterson came to Bella Vista Prep last season, and helped the program win a Grind Session National Championship. One of the top recruited prospects in the class, Patterson is now mulling over his options for the future, as he considers whether to be a part of the 2019 or 2020 Class.

Currently, Patterson is thinking things over and could decide to attend a college program this fall, or he could attend another year of prep school.

"I truly think if Addison were to reclassify that he would be more than ready to fight for a position at the D-1 level, especially after the work he’s put in over the summer improving his body,” said Dionne Phelps, who helped coach Patterson at Bella Vista Prep last season. "At 6-7 and with a scorer's mentality, I can only imagine the number of schools that would line up to have him on their roster. He did a great job for us and we wish him the best in his next pursuits.”

And Patterson will have many college options for himself if he decides to play for a college program this fall. It is unclear as to which of the schools will have a scholarship for the fall, but Patterson currently has many schools that have currently extended him scholarship offers.

Currently Patterson has offers from Memphis, Florida, Iowa, Ole Miss, Oklahoma, Oregon State, Illinois, USC, Syracuse, Arizona State and Oregon, with many more schools expressing serious interest and many more offers on the horizon, if he decides to stay a part of the 2020 Class. If he decides to go to college now (fall), then he will have to make a decision on a college program that has a scholarship available. Most college programs would look to create a scholarship for such a top-rated national talent.

Patterson is a big-time individual talent that makes a difference on any team that he competes for, so the opportunity to add him to a roster is very intriguing and exciting for a college program. Patterson's versatility allows him to make any team better.

This summer, Patterson will travel next month to take part in the Nike-sponsored Peach Jam, and compete against some of the nation's elite overall prospects. It seems as though Patterson will make his decision regarding his future after the end to the Peach Jam.

Stay tuned for Patterson's decision, and we will continue to follow this story very closely to bring you any updates as they continue to develop.

Arizona Hoop Review Scouting Report: Patterson is an athletic and skilled wing prospect that is able to plays as a guard or as a wing. He compliments his elite athleticism with the ability to make plays.  Patterson can score from all three levels, but he is the most dangerous when attacking the rim and creating offense for himself or his teammates.  He is a good shooter of the basketball with three-point range and consistency, although he still needs to add more range on his shot for the collegiate level. He is a very good mid-range player that operates in the mid-range and is a strong finisher at the rim. A very good slasher and finisher in the lane. Strong finisher in transition where he can use his speed and killing ability.  Patterson is a very good passer and also possesses a good basketball IQ.  Patterson has a good motor on both ends of the floor and rebounds at a high level for a guard.  He competes hard defensively and plays with great energy. Patterson is currently ranked among the nation's elite in the 2020 Class, and has a very bright future ahead of him.