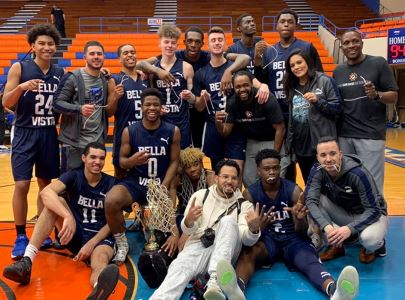 It was a huge weekend for Bella Vista Prep and Arizona basketball, as Bella Vista would join Hillcrest Prep as winners of the Grind Session's National Championship, after the program got their revenge and defeated top-rated Spire Academy (OH) by a narrow margin this weekend, 96-94, in front of a large crowd in Kentucky - an amazing accomplishment for Head Coach Kyle Weaver, his staff and his team of talented prospects.

Over the weekend, Bella Vista Prep would win (4) games to win the tournament, including a big semi-final victory over Prolific Prep (CA), in which 6-foot-3 junior guard Jeron Artest would be selected as the game's Most Valuable Player, for his terrific 20-point performance.  Artest would also provide an excellent defensive effort in the victory, which he would carry over into the tournament final against Spire Academy.  In the championship game, Artest would be tasked with guarding Spire star guard Lamelo Ball, which he would do an excellent job on throughout the game - an effort by Artest which had a lot to do with the program's ability to win it all.

In the final game, University of Arizona signee, gifted 6-foot-7 senior wing Terry Armstrong, who was selected as the MVP of a quarterfinal victory over Aspire Prep (KY), would collect a loose ball late in the contest and travel the length of the floor and finish the play with a dunk.  The exciting play would cause the Bella Vista bench to rush the court, which would lead to a technical foul call.  After both free-throws were made by Spire Prep, Bella Vista would eventually win the game by two points.

No player came up bigger for Bella Vista more than 5-foot-10 superb sophomore guard Zion Harmon.  A native of Kentucky's Marshall County High School where he transferred from just recently, Harmon was not a part of the Bella Vista team when they first faced Spire Academy in December in the Hoop Hall West event in Arizona.  He would have been much needed then, as Bella Vista struggled in the contest to get good shots for their top performers.  In the rematch this weekend, Harmon came up huge, as he finished with with a team-high 23 points, 9 rebounds and 6 assists in the championship game - earning Most Valuable Player honors in the game for his tremendous effort.

The Bella Vista Prep program is absolutely loaded with talented prospects, and will look to add much more top-rated national talent throughout the off-season.  The program, behind the leadership of Kyle Weaver and Director of Operations Dion Phelps, a former division-I coach, is in an excellent position.  The program has done a lot to raise the level of basketball in Arizona, and also has brought a lot of respect to the state, as each of the state's top prep schools have done and continue to do.  With Hillcrest Prep winning a previous national championship, and now Bella Vista Prep joining the fray, the state's basketball culture is at the highest level it has ever been, and is continuously improving.

Congratulations to the Bella Vista Prep program on this tremendous accomplishment, and for all that they are doing to take Arizona basketball to completely another level.