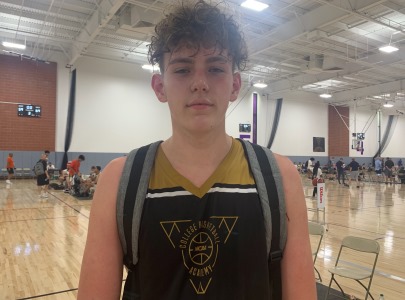 One of the top overall prospects in the state of Arizona right now is Sunnyslope High School's 6-foot-10, 220-pound junior post Carson Basham. After a solid sophomore season for Head Coach Ray Portela, Basham took his game and his college recruitment to another level this spring and summer, and now returns for his senior season as one of the elite young prospects in the state.

Basham's overall numbers were modest as a sophomore, while on a very talented but young Sunnyslope team that looked to develop an identity, after the recent and past success of a veteran Vikings' lineup that took the team to several straight state title appearances. Basham emerged as a nice looking future prospect and showed excellent promise and glimpses of a gifted post prospect.

This spring and summer, while traveling with a California-based club program, Team Arsenal (CA), Basham gained loads of exposure and division-I interest for himself - absolutely raising his recruiting stock in a short period of time.

Over the past (6) months, Basham has received a long list of Division-I offers for himself from numerous college programs, as TCU, Washington State, Grand Canyon, Loyola Marymount, Pepperdine, San Francisco, Santa Clara, UC-Santa Barbara, Montana, Northern Arizona, Louisiana-Monroe and UC Riverside have each already extended offers to the talented post prospect with an advanced offensive skillset and approach to the game.

Basham is coming off a strong performance also in last week's NCAA Basketball Academy, where he showed a nice ability to block shots with good timing, keep the basketball up high for putbacks, rebounded well, ran the floor and showed a nice overall offensive skillset with a soft touch from the perimeter. Many college coaches in attendance were were showing him love last week, and I came away very impressed with this young man's ability to play the game and his overall promise for the future. He should only continue to see his list of college suitors continue to grow over the next year, at a large number.

Basham is still very young and is just beginning to grow into his large frame. Over time, and especially the next two years, he will see his body change a great deal as he matures physically. He does enough on the floor now to give you a good glimpse in his future.

I will continue watching Basham develop very closely over the next two seasons and look for him to blossom over time, and become one of the state's most sought after recruiting targets.

Arizona Hoop Review Scouting Report: Carson Basham is a unique find in the state of Arizona, as he has excellent physical size and agility, and an advanced skillset for his age - suggesting that he is only going to continue to get much better over time. He has a professional approach to the game. An active rebounder and shotblocker with good timing. A good low post scorer with a good jump hook and low post footwork, and also an ability to step outside and make shots out to three-point range with a soft shooting touch. He runs the floor well and is a good finisher in transition. A fundamentally sound post player that is garnering loads of division-I interest early in the process, and has a very bright future ahead.