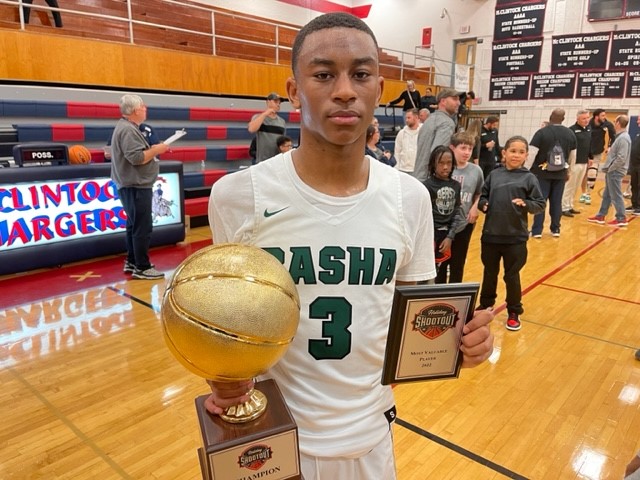 The McClintock Holiday Shootout finished up Thursday evening, just before the end of the 2022 calendar year, with a nice Championship match-up between two of the state's top 6A programs, as Basha High School (17-0) and Highland High School (13-2) matched up in the tournament final. Basha came into the final tournament game on a complete roll for the high school season and with an undefeated record, while Highland would look to turn in another nice upset victory over another one of the state's elite teams - making for a nice contest in front of a nice crowd at host McClintock High School.

Basha came into the game Thursday evening as the clear favorite, as this year's Basha team has rolled through all of their competition this high school season, except in a semi-final contest with Desert Mountain High School, which resulted in a 82-81 last second victory for the Bears, after a strong tip-dunk by 6-foot-7 freshman forward Elijah Summers-Livingston at the buzzer - one of the best games in Arizona basketball history. Other than that very close call, Basha has dominated their competition this season behind the strong leadership of Head Coach Mike Grothaus and his staff.

Highland was primed to get the upset in the championship game. Led by the play of rising star 6-foot-3 senior do-it-all guard Noah Peterson. Peterson came into Thursday evening's contest as the top individual performer in the tournament, as he had posted several top performances while leading his team to the tournament's championship game. Highland's tournament run included a big win over Liberty High School in the quarterfinals. Highland is also very well coached by Head Coach Todd Fazio and his staff - making for an excellent coaching duel in the tournament final.

Both teams would come out firing early, as two consecutive baskets and a nice assist for a score from Noah Peterson would get Highland fired up early, but three-consecutive baskets from 5-foot-11 star freshman guard Mason Magee (pictured) would slow down the Highland run. Basha would lead 15-12 after the first period.

At halftime, Coach Fazio and his staff would certainly make some adjustments and the Highland team would storm back in the second half to keep the game very close, with Basha looking to extend their comfortable lead. Highland would remain close in the third period - setting up a nice final fourth period between the two teams, although Noah Peterson would earn his fourth foul late in the third quarter.

In the fourth period, with 7:15 left to play, Highland would get to within 5-points of Basha, 51-46, after a three-pointer from the corner from 6-foot-2 junior guard Josh Gulbrandsen.

Another three-pointer from Christian Warren would give Basha some breathing room with 5:14 left to play in the contest, 60-50.

A nice double-pump layup in traffic by 6-foot-1 senior guard Brock Knollmiller would get Highland back to within 6 points, 60-54. Then a driving, spinning layup in traffic from Noah Peterson, followed up by another driving layup around a defender by Peterson, would pull Highland to within 5-points of Basha, 63-58, with 2:23 remaining. Peterson would foul out with 1:50 left to play in the game, after a foul on the inbounds, as Highland looked to get a turnover in the backcourt. Peterson fouling out would end Highland's chance of a comeback, and Basha would spread the floor and make free-throws down the stretch - leading to a nice 72-60 Championship win.

Basha freshman stud guard Mason Magee would finish the game with 18 points, and earn Tournament Most Valuable Player honors for his performance throughout the tournament.

Basha would improve their undefeated record on the season to 17-0. Basha will face Boulder Creek HS on Tuesday (1/3) on the road, and will also face Brophy Prep on the road (1/13) and host #1 ranked Perry High School (1/15) in January - making for some exciting match-ups for the Basha program coming up. Highland proved that they can match-up with any team in the state in this year's McClintock Holiday Shootout, and they will be a force to be reckoned with through the remainder of the high school season.