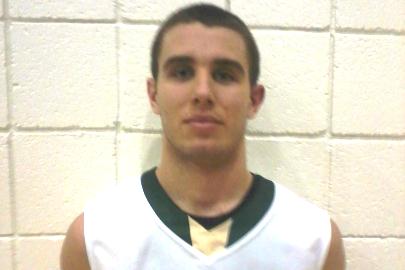 On Friday, January 4th the Basha Bears (6-10) took on the Highland Hawks (12-4).  It was a tale of two teams going in two different directions, as Basha HS had lost 6 of their last 7 games, while Highland has won 9 in a row - including a big holiday tournament championship at the McClintock Holiday Shootout last week.  Both teams boasted star players who will play at the Division-I level in college.  Basha has 6-foot-9 senior center Maurice Kirby (Virginia Tech signee) and Highland HS has 6-foot-5 junior wing prospect Jake Toolson, who has multiple division-I offers currently.

The game started with Toolson on Kirby - a huge size advantage for Basha, but Basha started off really cold from the field.  Kirby was getting doubled or crowded when he touched the ball, so he would have to kick it out to his teammates who weren't able to cash in.  Finally Kirby got fouled and went to the free-throw line on two possessions in a row - making 2 of 4 shots for a quick 2-0 lead for Basha.

Highland then made consecutive three-pointers for an early 6-2 lead.

Then Kirby went to work for two shots in a row, for a 6 to 6 tie game.

Highland HS 6-foot-2 junior SG Austin Witherill got in the act and drained a jumper, followed by Toolson for a 10 to 6 Highland lead.

Basha then went on a 5-0 run, led by 5-foot-11 senior guard Richard Holt with a nice “and-1” play.  Holt had just got cleared the day before from a reportedly torn ACL injury.  Basha lead 11-10 after the first quarter.

The second quarter started with Kirby getting two hard buckets in traffic to put Basha ahead 15 to 10.

Toolson then took the ball hard to the basket for himself and scored an “and-1” for a 15 to 13 Basha lead.

Basha's 6-foot-2 junior SG Nate Markovich made his presence known, and hit one free-throw for a 16 to 13 lead.  Then 6-foot sophomore wing David Perez came off the bench to score a deep three-pointer for a 20 to 17 lead.

Highland's Toolson came down on the next possession and scored again to close the gap - still a 20 to 19 Basha lead.  Then a few plays later, Toolson stole the ball for a nice dunk and a tie game at 23 all.

Highland's 6-foot senior point guard Isaiah Washington hit a three-pointer for a 26 to 25 Highland lead - the first lead of the night for the Hawks.  But a "helter-skelter" play at the end of the half would give Basha a 28 to 26 lead, as a shot by 6-foot sophomore wing Cole Kepler would bank off the glass at the buzzer - getting the crowd to go crazy.

It was a very competitive first half where both teams were trying to limit each other’s star players.  Kirby had a team-high 8 points to lead Basha HS, and Toolson had 9 to lead Highland at the half.

The third period started with back-and-forth play, once again, until Toolson grabbed a big rebound and a bucket for Highland, followed by a Witherill fade-away shot for the biggest lead of the night at 39 to 33 for Highland.

Kirby then scored on an offensive tap-in shot from close, but turnovers and Toolson playing well helped to balloon the lead to 11 points for a 48 to 37 Highland lead.  Kirby finally ended the bleeding with a turn-around jumper for a 48 to 39 Highland lead.  After a jump shot from Nathan Markovich, Highland would finish the third quarter with a 48 to 41 lead.

The fourth quarter started and Basha would get things going again.  Basha's 5-foot-9 sophomore PG Chris Ahearn came out firing - hitting a 3-ball for a 48 to 44 Highland lead.  After two free-throws by Highland's 6-foot-3 senior SG Bryce Farabee with 6 minutes to go in the game, Markovich got a steal and lay-up for 50 to 46 lead for Highland.  Kirby then grabbed an offensive rebound and converted a lay-up - cutting Highland's lead to two points, 50-48.  On the next Basha possession Kirby got another lay-up to tie it at 50 all, with 2 minutes left to play.  The comeback for Basha was official.

Farabee then hit a huge 3-point shot after a beautiful pass from Toolson, for a 53 to 52 lead.  Then Basha's Holt would take the ball and fall down.  Highland would pick it up and score a lay-up for a 55 to 52 lead.  Holt re-injured his leg and wouldn't return to game.

Once again, Basha's David Perez would come off the bench and hit a clutch 3-ball in the corner with 1-minute left to tie it at 55 all.

Toolson, of course, would have the ball in his hands and would find Witherill wide-open for a three-pointer in the corner, but Witherill would miss the shot.  Basha would rebound the basketball and then play for one shot, as everyone would clear out for Markovich.  Markovich would wait with :04 seconds to go and then drive the lane - getting fouled with :01 second left to play.

Markovich would miss the front-end of two free-throw attempts, while Highland would then call for a timeout - looking to possibly make Markovich nervous or “ice him.”  It did not work as Markovich would return to make the second free-throw - giving Basha a one-point lead, 56 to 55.

Highland called their last timeout with :01 second left to set up a final play to win the game.  Highland would return to in-bound the ball to Witherill, who would throw up a half court desparation three-point attempt at the buzzer, but to n0 avail.

Basha would pull out the huge upset for a 56 to 55 win over Highland.

Jake Toolson had a game-high 17 points, 5 assists and 3 steals in the loss, while Austin Witherill also had 15 points in the loss for Highland.

Basha hopes this big win can turn their season around and help them to make a run for the state playoffs.