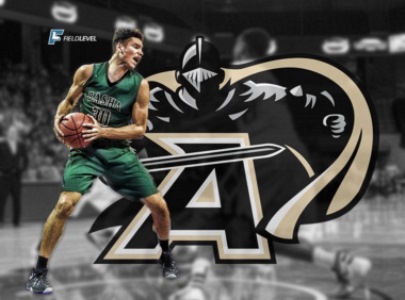 The very coveted 6A State Championship is the top state class of it's kind in the state of Arizona, and this season the Arizona Interscholastic Association (AIA) introduced the 6A Division for Arizona high school basketball.  Whether it was the 6A trophy or last year's Division-I trophy, the Basha Bears (31-1) had an amazing season - finishing with an a near perfect record and defeating former state juggernaut Corona Del Sol 75-65 for the 6A State Championship.

In front of a ridiculous crowd at Grand Canyon University for the second night in a row, the state's top two teams in 6A matched up.  Corona featured the state's top two high school prospects in the 2017 class not named DeAndre Ayton (University of Arizona signee), while Basha featured the state's best overall team, led by a terrific imposing talent - 6-foot-6 senior forward Gabe McGlothan (Army signee).  The talent level of McGlothan and the terrific support of his well-balanced team would be the major difference.

Corona though would come out to take an 18-13 lead after the first period, but Basha would pull together to take a nice 39-30 halftime lead, after a huge 26-12 second quarter in which 6-foot-4 senior guard Terrell Brown (Northern Arizona football signee) would ignite - knocking down several three-pointers in a row in the second period to help his team take the game's momentum.

In the second half, both teams would match one another, as Corona's 6-foot-3 senior guard Saben Lee (Vanderbilt signee) would catch fire late in the game - mounting a comeback in the game's final minutes to keep the Aztecs close, but the continued strong performance of Brown and McGlothan would be enough to  pull out the championship victory for Basha.

Terrell Brown finished with a team-high 23 points, while McGlothan would come up big defensively all game, and finish with 21 points of his own.  Brown made numerous shots down the stretch fo Basha to keep his team ahead late.

6-foot-3 senior guard Alex Barcello (University of Arizona signee) finished off a storied high school basketball career in the state with a terrific game for himself - scoring a game-high 25 points on 9-of-19 shooting from the field, while Saben Lee finished with 19 points, but made just 5 of 20 shots in the loss.

Barcello finished his high school career with two state championships and three state title-game appearances, as the Corona Del Sol basketball dynasty that lasted for a decade in the state now seems to have come to an end.

Basha turned in what was almost a perfect season for head coach Mike Grothaus and his staff.  Grothaus, a former college coach from Mesa Junior College, took the Basha job several years ago,and simply built this program into a dynasty of their own.  Grothaus has worked very hard to develop a winning tradition at Basha High School, and now the time has come for this program, which features loads of athletic talent in the east valley, to continue to build on a season which proved they now have what it takes to win consistently and to win it all.