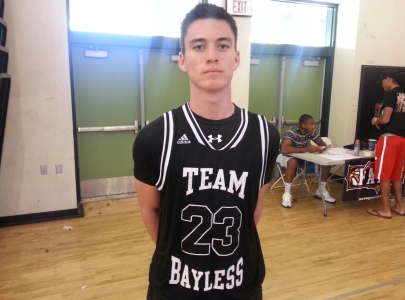 While still very young in it's origin, the 2017 class in the state of Arizona burst onto the high school basketball scene in Arizona last season without much obstruction - gaining success at a high level and emerging at it's own will.  As a result, numerous prospects in this very young class have soared very early and have gained major national attention in their recruiting efforts.

Recently, Perry High School's gifted guard prospect Markus Howard gave a huge verbal commitment to Arizona State University - a commitment that may have very lasting effects on the local basketball community.  While Howard's decision was an important one, other top-rated prospects in the same class may eventually have just as much of an impact in their respective college recruitment.

One such prospect is Corona Del Sol High School's 6-foot-1, 170-pound sophomore point guard prospect Alex Barcello.  Barcello is a terrific young budding star guard prospect that is coming off a strong freshman season at Corona, and an even better spring and summer performance for himself on the club circuit.  As a result of the promise that Barcello has as a college prospect, many high-major division-I college programs are already in hot pursuit of him.

Barcello has a chance to become one of the best guard prospects to come out of the state in some time, and with continued development and hard work, he should become a serious nationally ranked prospect over time that will receive much national attention from scouts and media abroad.  He has tremendous work ethic and has a professional approach to the game that is not often seen by players his age.  I have been very impressed with this young man's ability to play the game, and also how he carries himself on and off the floor.

Barcello will only continue to improve a great deal over time, and I look for him to be one of the hottest prospects in the West over his next 3 years of high school basketball.  It is still unclear as to when Barcello will make his college decision, but I do not expect him to make a rapid decision as Howard did.  Look for Barcello to take his time in the recruiting process and make a much later decision for himself.

Myself and our staff will continue to follow the college recruitment of Barcello closely throughout his recruiting process, and expect this young man to become a special player over time.  He looks to already be off to an amazing start to his young career.