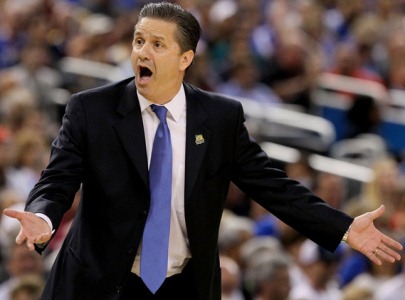 While superstar 6-foot-11 freshman Marvin Bagley III will eventually receive scholarship offers from every college program across America, the latest elite high-major division-I rogram to jump into the Bagley sweepstakes is the University of Kentucky.  Kentucky extended an offer to Bagley this week - joining many other college programs that have already shown their hands early in the recruiting process.

"I just want to give God the praise," Bagley told the Arizona Republic newspaper.  "I also want to thank Coach Calipari and the University of Kentucky."

Bagley is already the best prospect ever in the state of Arizona.  It is actually scary to think of how good he will become over the next 3  years of high school basketball.  He is a sure-fire future NBA lottery draft pick, based on my personal experience with such prospects, as he is already a ridiculous basketball prospect with amazing potential for the future.

This past high school season, Bagley was amazing in his freshman season - helping lead his three-time defending state champion Corona Del Sol Aztecs to another almost perfect season (33-1), and their fourth-consecutive state championship.  Bagley put up impressive numbers all season, and became the state's biggest attraction, for fans in the state and outside of it.

Bagley was also selected by Rivals.com and Scout Hoops.com this season as one of the top 10 overall prospects in the country - regardless of class.  A ridiculous honor for an Arizona high school prospect.

This spring and summer, while many high-profile club programs have tried to lure Bagley to play for their teams outside of the state, Bagley, unlike many high-profile prospects before him, chose to represent his state of Arizona and play for his own Arizona club team known as the Arizona Family.  Coached by his father, the team is loaded with young talent and will do their best to raise the reputation and respect for Arizona basketball nationally - something I personally highly respect the Bagley family for doing.

Bagley should have a long, lengthy college recruitment, so we will see many, many more scholarship offers for this young man.

Arizona Hoop Review Scouting Report:  Bagley, simply put, is one of the most advanced young basketball players that you will ever see.  Already standing 6-foot-11, Bagley moves very well up and down the floor and already plays with a knack for the game well above his age.  He has a very quick twitch around the basket, in which he uses to get up quickly for a finesse finish on either side of the basket, or just rise right up and power a dunk down – usually over defenders.  He also possesses advanced footwork in the post, as he feels where his defenders are on him, and will make a successful move around them, often with a double-team coming to him.  Bagley also has a very nice shooting touch which can extend out to 23-feet roughly, when left open in a half-court set.  He also can rebound the ball at a good rate over older defenders, and can lead a fast-break going the other way if need be.  Bagley is currently ranked as the Number #1 overall 2018 prospect in the country by numerous scouting services, and rightfully so.  Bagley is a very special type of player for the future, and is the new face of Arizona high school basketball.