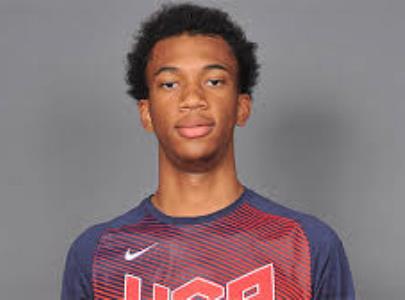 The era of Marvin Bagley in the state of Arizona is now in full swing, as the amazing superstar freshman prospect has now officially made his presence felt on the Arizona basketball community.  The 6-foot-10 freshman post would lead his 3-time defending state champion Corona Del Sol Aztecs to a nice 84-70 win over Philadelphia's Imhotep Charter on opening day of this year's Visit Mesa Basketball Challenge at Mesa Mountain View High School.

Corona Del Sol (9-0) is as talented a high school team as the state has ever seen already, led by the play of Bagley, star 6-foot-2 sophomore guard Alex Barcello and, of course, athletic 6-foot-6 senior forward Dane Kuiper (University of New Mexico signee).  The talented trio are as good as any the state has ever seen, and they would combine to lead Corona to a big third period on Friday evening in front of a large crowd - outscoring a gritty Philly group, 45-32 in the third period.

Bagley was just too much for a smaller Imhotep team that utilized strong guard play to ignite their offensive attack.  The ball handling of Barcello and the physical toughness of 6-foot-4 senior forward Cassius Peat would keep Imhotep at bay, while Kuiper's ability to finish plays in transition and at the rim would make it difficult for Imhotep's guards to defend the Aztecs.  The length and athleticism of Bagley would create many problems for Imhotep, as he would block or alter many shots of the opposing team's guards.

While the young Bagley has the potential to get into foul trouble, his presence on the floor for the Aztecs makes them a great team.  Without Bagley on the floor, the well-coached Aztecs are very good, with him they can be great.  This team is a true joy to watch and it will be very interesting to see if any team in this year's tournament will be able to hand the Aztecs a loss.  Pinnacle, Shadow Mountain and Gilbert HS have each come very close this season already to defeating the Aztecs, but have failed to close the deal.  Corona will face a talented Gilbert Christian team at 5:30PM on Saturday evening in this year's Basketball Challenge.