Back To School Bash Recap 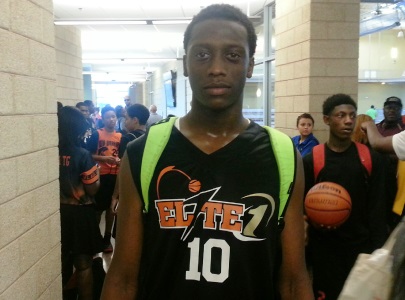 The Back To School Bash took place this weekend at the Kroc Community Center in South Phoenix.  Organized by Harding Group Basketball and Arizona Elite Tournaments, and directed by Cline Daniel and Tamica Goree, this event included boys and girls basketball talent from 2nd through the 12th grade.  The event was fun and had a DJ playing music at center court in the 2-day event.

I was able to attend the tournament action on Sunday and observed the championship games for the boys 17U and 16U divisions, and also the girls championship game for the 13U division.  The event was well organized and had a nice arrangement of games to observe throughout the day - different age groups and genders playing side by side.

The Elite 1 Warriors would win the 17 & Under Division of the tournament behind the strong play of 6-foot-4 prep guard Leo Goodman.  Goodman emerged in this event as a very nice division-I prospect for the future - an unknown prospect before the event that proved just how underrated he is.  Goodman, a post-grad for Elite 1 Prep School in Arizona,  led his team to the tournament championship in fine fashion - scoring the basketball from inside and out, finishing strong in transition, and showing his athleticism on the defensive end.  He also threw down some nice dunks on the day.  Goodman was the best overall prospect I saw on the day.

Goodman is a native of Roosevelt HS in California, and is looking to maximize his college recruitment this season in Arizona.  Currently, he advised me that he is being recruited the hardest by Stetson University in Florida.

5-foot-10 freshman guard Lammel Wallace is a native of Kansas, but he makes the trip to Arizona monthly to play for this team, the Warriors/Aces.  Wallace was the best underclassman prospect of the event - able to create his own shot for himself at any time on the floor.  He also possesses very good body control and is a strong finisher already for his young age.  He possesses a nice shooting stroke already as well, and should develop into a high-major prospect over time.

Elias Chawki and 6-foot-4 junior wing Joshua Wenneberg of Horizon High School also both contributed nicely for this team in the tournament title.

Winning the girls 13U tournament title, once again, was the Arizona Magic.  This team of girls has won double-digit tournament championships since the beginning of the spring, and seems to have no competition in the state.  Coached by veteran head coach Joe Alvarez and led by the play of his daughter, Alyssa Alvarez, this team seems to win every time they step on the court.