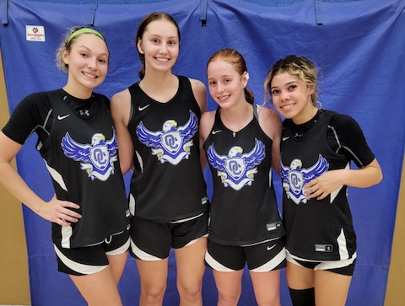 Willow Canyon Men’s Coach Joe Colletti has done a great job in building the Best of the West Fall League over the last few years. The League’s success has attracted attention of Girl’s High School Teams to participate, so Coach Charles Wilson of Sandra Day O’Connor High School girl's basketball opened his facility to accommodate the teams wanting to compete. There was a nice collection of college prospects. Here are the few that caught my eye:

An elite wing prospect with impressive athletic ability, Elsholz is a three level scorer who can pose matchup nightmares for opposing teams with her size, length, and athletic ability. She uses her skill set to attack the basket, hit mid and long range jumpers. Besides being lethal offensively, she can defend at a high level. Currently she holds a D1 offer from Army (West Point)  and I anticipate more schools to offer in the weeks to come.

Snyder is a solid combo guard who can facilitate and score. She has a great feel for the game and makes sound decisions offensively. I like her relentless motor and athleticism. Snyder is an impressive defender who can create offensive opportunities off of forced turnovers. She is a solid low-major plus prospect who is extremely under-recruited. Snyder is a great sleeper prospect for any college.

McCort has good size and athleticism who makes her presence known in the paint. She cleans the glass well and moves her feet well. I like her soft touch and am impressed with her mid-range scoring ability. Another solid sleeper prospect who caught my attention.

Centennial High School has an impressive front court to keep an eye on. Young compliments her team with size, athleticism and scoring ability. She passes the eye test of a college prospect. Young is a good low post defender and cleans the glass well. Another sleeper prospect for colleges to keep an eye on.

Prpich is a fundamentally sound combo guard with a great skill set. She is a physical downhill attacking guard who looks to finish at the rim or distribute the ball to open teammates. Prpich can score at all three levels and utilizes her athletic ability to be a brute defender. Another solid college prospect to keep our eyes on.

Stevenson is an athletic guard prospect with great motor. She plays aggressively on both ends of the floor and defends at a high level. I liked her ability to get down hill and how she looks to play physically. A nice sleeper prospect to keep a tab on going into the winter.

A skilled combo guard who has a tight handle who thrives in Coach Almazan’s uptempo system. She is extremely skilled offensively and displayed to be a scoring threat at all three levels. She is a solid low-major plus prospect with a great ceiling.

Daniels caught my eye as she is a physical prospect who possesses good skill, length and athleticism. She displayed great offensive scoring ability and is confident in pulling the trigger from deep. Daniels has tremendous upside and I anticipate her college recruitment to catch fire going into the winter.

Bartee is one of my favorite floor generals to watch compete. She has a great IQ and feel for the game. Bartee gets after it on both ends of the floor. I like her ability to put teammates into scoring positions and her offensive skill set is great. A solid low-major plus prospect with tremendous upside.

Koester is one of my favorite hidden gems uncovered at this Fall League. Her length, athleticism and relentless hustle is what caught my attention. Koester is a physical wing prospect who is one of the state’s better defenders. She has outstanding athletic ability and will be a solid sleeper prospect for colleges to monitor. I anticipate her having a huge season this winter.

Elliott is one of my favorite backcourt players in the loaded 2026 class. She is still young to the game however she knows how to utilize her size and athletic ability to clean the glass, block shots, and score inside.

Mallory’s play impressed me as she is extremely skilled with an excellent feel for the game. Her game’s maturity is what took me away as she is an elite floor general with high IQ, scoring and play making ability. Don’t let her size fool you as she is a potent scorer and facilitator.