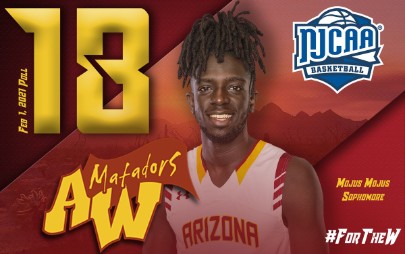 While Maricopa County Junior Colleges have had their season's cancelled, Arizona junior college programs outside of Maricopa County are playing this season (2021), and are off to a solid start. Arizona Western JC is off to a hot start on the junior college season, with a 7-1 overall record on the season, and a strong 6-1 record in conference play. Arizona Western currently holds on to a first-place standing in the Arizona Community College Athletic Conference (ACCAC).

Arizona Western's talented sophomore Mojus Mojus (San Diego, Calif.) has been named as the ACCAC Division-I Men's Basketball Player of the Week for the period of Jan. 25-31 - the first to receive an honor in the ACCAC.

Mojus scored 28 points as the Matadors defeated Central Arizona, 96-87, in overtime. He added 14 rebounds and connected on 11 of 18 shots from the floor, while also contributing 2 assists and a steal.

Due to the COVID-19 pandemic and protocols, not every Arizona juco has played this season, or played many games as of yet. Cochise currently ranks as the #2 team in the conference with a 2-2 overall record and a 2-1 record in the ACCAC standings.