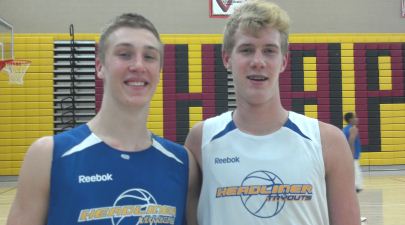 This year’s 2012 Arizona Reebok Headliner Tryout Camp, held at Chaparral High School on Sunday, May 6th was one to remember – one of 13 camps of it’s kind across the country.  This year’s field of participants was filled with talented prospects from across the state of Arizona, and also across the country.  With many prospects in attendance from the state of California, Louisiana, New York, Vegas, Florida and New Mexico, this year’s group of participants were fired up to compete for an invitation to this year prestigious Reebok Breakout Camp – sponsored by Reebok and NBA player John Wall (Washington Wizards).

In front of more than 30 members of the camp staff, this year’s participants competed throughout the day for an opportunity to earn an invite to this year’s camp, which will be held in Philadelphia, PA on July 10-13th.

This year's camp action was fierce and filled with many talented prospects competing for an opportunity to go to the big camp.  As a result, many players in this year's camp had breakout performances - raising their level of play in the one day event, and helping themselves considerably from a recruiting standpoint.  As a NCAA certified basketball scout, my objective for the day was to see which prospects in the camp really made a strong case for the camp, but also to evaluate prospects from the camp for college programs across the country.

Here is a list of players that really helped themselves this weekend with strong performances in the Arizona Reebok Headliner Tryout Camp, and look to be prepared to have much bigger spring and summer performances as a result.

- Richard was voted as the best camper of the day, and as a result, earned one of the top 5 camper invites for this year's Reebok Breakout Camp.  A high-scoring output performer from this year's 2011-2012 high school season, Richard put it all together in this year's camp.  Of course, the fast-breaking style of play from this weekend's event suited Richard nicely, and he proved that he can play at a high level - utilizing his athleticism and high-skill level to make plays in the event.  Richard shot the basketball well, made plays and finished high above the rim on the day.  An electric performer that has played very well this spring and is receiving high-major division-I interest as of late, as a result.

- Hollway raised his stock as a player as much as any player in this weekend's camp.  He scored at a high rate throughout the weekend and was given high consideration as a selection for an invite to this year's camp.  In fact, he was selected among the invites for the camp, but was added to an alternate list as a result of the few invites available for this year's Reebok Breakout Camp.  Either way, Hollway proved that he is among the top prospects in Arizona's 2013 class and looks to be prepared to have a strong off-season.  A smaller combo-guard prospect, it is still unclear as to what level of college Hollway will land at in the future, but his performance this weekend proves that he is capable of playing at a division-I level - most likely a lower level program.

- MacDougall is a fast-rising post prospect in the 2014 class.  Already receiving serious attention already as a result of his strong play this spring on the club circuit and garnering much recruiting attention from many college programs - MacDougall is a talented and strong post prospect that has developed rapidly this spring.  His ability to rebound at a high rate and finish strong around the basket with a variety of low-post moves is very attractive.  McDougall should continue to develop into a high-major division-I prospect over the next year.

- Kempton is already receiving very good attention from college coaches, as a result of his strong play already this spring.  Kempton's performance this weekend though was his best to date, as he showed an ability to run the floor very well and finish strong.  While not possessing great lift off the floor, Kempton makes up for it with his high basketball IQ and an ability to play the game on the floor.  His excellent size and nice skill level allow for him to make plays around and away from the basket, while also being a very good passer and a strong rebounder.  He moves very well without the basketball.  A nice looking post prospect that will get his share of recruiting attention this summer from college programs at every level.

- Wilson is another very underrated prospect that proved in this year's camp that he is ready to make a case among the top overall performers in Arizona's 2013 class.  An unheralded prospect currently, Wilson is beginning to raise eyebrows of college coaches with his body and athleticism, combined with excellent length and a knack for the basketball.  While only playing the game of basketball for several years in an organized fashion, Wilson has very good upside as a player and has excellent potential for the future.  While he was not selected for the camp, Wilson is definitely a prospect on the rise for the future.  Hearing from Weber State.

- Mendoza is another 2013 prospect that turned in another strong performance for himself.  Already heralded as one of the top prospects in Arizona's 2013 class, Mendoza flourishes in an uptempo style of play where he is able to make plays in transition and while slashing to the basket.  Plays well above the rim and has a nice rangy frame.  Still needs to add size to his thin frame to realize his true potential as a player, but his sheer athleticism and length are attractive attributes for the next level.

- Berg always seemes to play well and in every environment, which makes him very intriguing as a player.  He is at his best in a half-court game where he is able to make shots from anywhere on the floor, but he really proved this weekend that he has command of the floor even in an uptempo style of play.  A fundamentally sound prospect that has definitely put the time in on and off the basketball court - making him a very effective offensive talent.  The best shooter in this year's camp and among the best shooters in the state - regardless of class.  Generating serious interest as of late from Northern Arizona.

- Ross is a combo-guard prospect that seems to look his best at the point position, where he is able to make plays off the dribble for himself and others.  Sees the floor very well and likes to pass to the open teammate.  Has a nice length of body and is able to finish in traffic.  A very good defender that is capable of becoming a lock-down defender over time.  Another very underrated prospect that raised his stock this weekend with a strong performance.

- Bankston was an unknown prospect before the camp, but was one of the top surprise performers at the end of it.  This young man has a nice looking lengthy body with very good athleticism, which allows him to make plays in transition and in traffic.  Still needs work on his perimeter skills to fully develop into a much better offensive talent, but his ability to rebound, slash and finish are attractive for a younger prospect.  Another very gifted prospect in Arizona's already loaded 2014 class.

- Hoffer's excellent work ethic and toughness as a player are glaring.  His fundamentally sound approach to the game is also very nice to see from such a young prospect.  Hoffer is coming off an excellent freshman season and looks to be destined for great things in the future - possessing no fear as a player and also a willingness to get it done against top-rated competition.  Does not make mistakes with the basketball often and finds the open man on the floor.  Pushes the basketball up the floor and has very good court vision.  Shares similarities to former Duke standout guard Steve Wojohowski.

- Shreiner is a another very talented prospect in Arizona's loaded 2014 class.  Another unheralded prospect since he plays at Glendale HS, Shreiner is among the most athletic prospects in Arizona's sophomore class and is a very good defender.  Shot selection can be questionable at times, but he makes up for it with his high motor and ability to make plays.  A good slasher and finisher.  As he develops his perimeter jump shot to become more consistent, he will see his game progress a great deal.  A mid-major prospect for the future.

- Matthews is definitely an unknown prospect to the basketball enthusiasts in the state of Arizona, but this young man is a nice talent.  A smaller point guard prospect, Matthews is as quick as they come with the basketball in his hands, making him very tough to keep in front.  An excellent penetrator.  Pushes the basketball and finds the open man.  Defensively, he has excellent lateral quickness and creates turnovers from opposing ball handlers.  A very good finisher for his size.  Good shooter with range.  Enjoys the game and plays with a great attitude.  A definite sleeper prospect in Arizona's 2013 class.

- Taylor was the next player that would have been selected after the final 16 participants.  Played very well in this year's camp and proved that he is a college prospect - possessing a very good-looking body and a nice physique on his 6-foot frame.  A combo-guard with a very good handle of the basketball and a nice shooting stroke.  A very good defender with good lateral quickness.  Needs to prove that he can play the point full-time to maximize his college recruitment.  Either way, he is definitely worthy of some serious attention from smaller college programs.