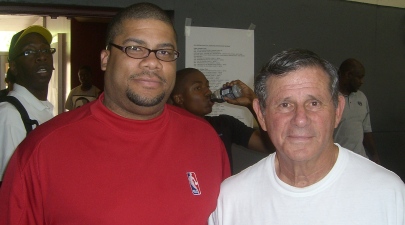 Today, our Arizona Preps' staff learned of the passing of our close friend Bob Gottlieb of Branch West Academy in Southern California.  It saddens my heart to report this news, as Bob has been a close personal friend of mine for more than 16 years.  Bob consistently supported my efforts here in Arizona of creating a basketball culture in the state, and supported many of our events.  He was a consistent supporter of the annual Arizona Preps Fall Showcase (pictured) and travelled to the event for many years - promoting his recruiting services to each of the participants.

The Gottlieb family is synonymous with basketball around the country, as his son Doug Gottlieb is a big-time basketball analyst with ESPN and CBS Sports, and his son Gregg Gottlieb is a current assistant coach with Oregon State University.

Bob Gottlieb has coached for 48 years, 5 at the high school level, as a college coach for 15 years, and then as an AAU coach for 28 years.  In addition he has coached in the NBA Pro summer league for 6 seasons as recently as the summer of 2000 including two Coach of the Year awards for the league.  From 2000 to 2003, Bob Gottlieb coached the Branch West College Exhibition Team and had superb wins over UCLA 92-67 at Pauley Pavilion in November 2002, San Diego State at Cox Arena,  Northern Arizona, Lamar, Marshall, Miami of Ohio and Brown from the Ivy League.

In addition, for the last 15 years he developed a unique niche in the basketball world. He is one of the few people in the entire country that specializes in representing outstanding high school basketball players who are somewhat under recruited, for whatever the reason, and helping them be recruited to all NCAA levels.

Bob will surely be missed be me and many people in the business around the world.  We love you Bob and you will always be in my prayers!