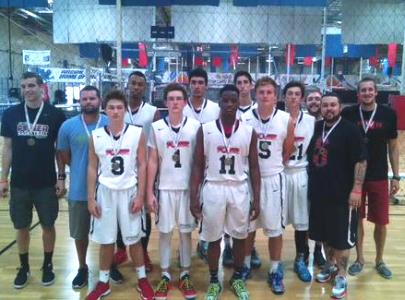 Arizona's 2017 class of prospects is very good and will be another amazing class of prospects for college programs to take a hard look at.  This spring and summer, many of Arizona's top prospects from the class have been terrific on the club circuit - winning numerous exposure events and keeping Arizona on the basketball map.

This weekend, a group of talented 2017 prospects from the Arizona Power organization, the Arizona Power Black 16U, won this year's Double Pump Best of Summer event behind some talented performers.  Led by the play of 6-foot junior guard Colten Kresl, 6-foot-6 junior wing Caleb Simmons, Cesar Chavez 6-foot junior guard Donald Carter and 6-foot-6 junior wing Jared Rodriguez, the team would prove to be the best team in a loaded field of 16U teams for the event.

Kresl is one of the state's elite guard prospects and has been for sometime.  Kresl had a big tournament this weekend, and should now begin to garner serious recruiting interest as a result.  Simmons is also among the state's elite talents in the class, and has the versatility and skillset that has him as a high-major prospect for the future.

Led by head coach John Ortega, the team would go undefeated in pool play by an average winning margin of 35 points, then would earn a second round bye, before blowing out their competition - reaching the semi-finals, where they would defeat a talented Pump N' Run Elite 16U team, 68-64.

Congratulations to this group talented 2017 prospects on their amazing win and performance this weekend, and also bringing more respect to the state of Arizona's level of basketball.