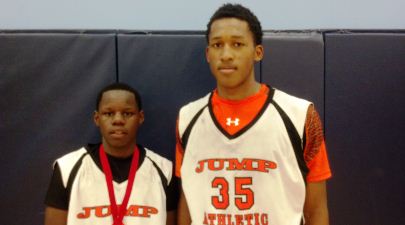 I spent my entire weekend covering much of the action in the boy's 16U and 17U Divisions at this weekend's Southwest Showcase Summer Championships at Avondale Sports Complex.

Another club tournament organized by long-time valley resident Ron Coleman, this weekend's version of the Southwest Showcase included 72 teams for the weekend, while another event organized by Coleman last weekend had 102 teams.  No one in the state works harder at creating playing opportunities for Arizona's youth than Coleman.

I caught up with Coleman this weekend, as he moved throughout the gymnasium - running from court to court.

"It's a lot of work," said Coleman.  "Sometimes you wonder how you get it all done."

While this weekend's event included many of the top teams in the state of Arizona, many teams were not in the event - taking the weekend off.  Of the teams that did participate, there was some very exciting action taking place.

I spent my time observing the 17U and 16U divisions for the event, and watched as the Arizona Magic-Seniors, coached Desert Vista HS assistant coach Paul Hardiman, won their second club tournament of the spring - defeating the Arizona Magic Elite 17U in the tournament's championship game at La Joya CommunityHigh School Sunday evening.

In the 16U Division, Jump Athletic coached by Brian Sachs defeated a very talented Arizona Magic Elite 16U team to win the tournament championship.

Jump Athletic was led in the tournament and championship game by the play of 6-foot-5, 210-pound freshman post Famoun Miller and 5-foot-7 sophomore point guard Navareio Holmes.  Both players came up big for their team throughout the tournament.  Miller's banked free-throw with 2 seconds remaining in the game sealed a one-point victory for Jump Athletic.

Congratulations to both programs on their tournament victories this weekend.