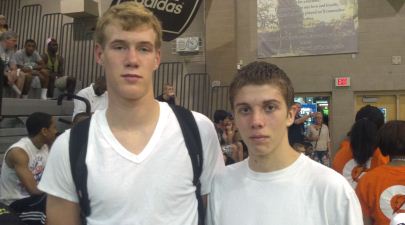 While the majority of teams in Las Vegas, Nevada this weekend had already returned home on Sunday, the 2013 version of the Arizona Magic Pump N Run were still playing on Sunday.  After defeating a tough Marcus Banks Hard 2 Guard (CA) team in the morning on Sunday in the Gold Division semi-final game behind three late free-throws by Westwind Prep Academy 6-foot-2 rising senior guard John Marshall, the team advanced to the division's championship game on Sunday afternoon at the tournament headquarters - Rancho High School.

Matched up with Martin's Wolverines (CO), the team would play one more game for the summer and for the Gold Division tournament title in front of numerous college coaches still in attendance.

The Magic would keep the game close in the first half, but would fall behind early as a result of the efficient offensive attack of the Wolverines.

Brophy Prep 6-foot-9 rising senior post Tim Kempton would keep the Magic close.  Kempton's ability to play inside and out created match-up problems in the game.  After falling behind, Westwind Prep Academy 6-foot-3 rising senior guard Kye de Laveaga would ignite the magic offense - connecting on consecutive three-point baskets and then being fouled on another three-point attempt.  De Laveaga's three-consecutive free-throws would bring the Magic to within three-points (26-23) late in the first half.

The Magic defeated  the OC Pride (CA), The Bluesquad (France) and then Ramey Basketball (CA) on Saturday afternoon and evening to advance to the final-four of the division.