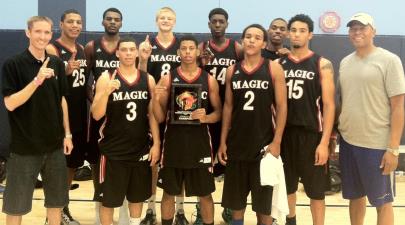 After a spring evaluation period where this team played some inconsistent basketball throughout club tournaments in Arizona and Vegas, this team has finally put it together - winning this weekend's Southwest Showcase Summer Championships in Avondale, Arizona.  Hosted by tournament organizer aficionado Ron Coleman, the Arizona Magic Elite, coached by Kenny Mullins and Gino Crump, would win this weekend's 17 & Under tournament championship amidst some stiff Arizona competition.

This team has looked impressive and ultra-athletic at times this spring, while other times they have looked just athletic.  Sporting a loaded team of all-stars from the state of Arizona, the team has lacked consistent guard play this spring and on-the-court leadership from it's players.  As a result, the team underperformed in the last Southwest Showcase event, the Main Event, when they lost in the tournament's semi-final round in poor fashion to fellow club foe, the Arizona Magic Pump N' Run-2014's.  Led by the play of the state's current top prospect Zylan Cheatham, the Magic PNR would easily blow past the Magic Elite team.

After another subpar performance in the Pangos Spring Spectacular in Las Vegas, the team would get it going in Dallas, Texas, in this year's Great American Shootout during the month of April and during the NCAA viewing period.  Behind the strong play of 6-foot-8 prep forward TK Edogi, Westview HS 6-foot-9 nationally ranked junior forward Andre Adams and Amphitheater HS 5-foot-9 junior point guard Yusef Shehata, the team would win the C-Division Championship in an absolutely loaded national event - comprised of more than 300 teams.

Riding a high from the Texas event, the team would participate in this weekend's Summer Championships ready to continue their winning run.  The team would blow out their first two opponents of the event - advancing to the semi-final round.  Behind the terrific play of Sunnyslope HS 6-foot-9 junior post Michael Humphrey, who had missed the entire spring with an injury to his thumb, and Andre Adams, the team would roll past their competition in fine fashion.

Congratulations to this team and their coaching staff on another nice championship victory, and good luck to them during summer competition.