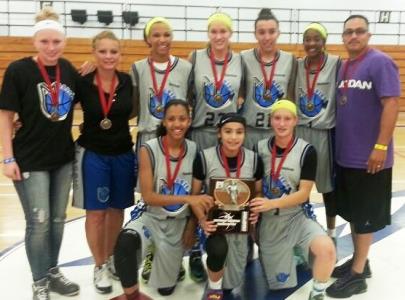 The Arizona Magic Elite 17U girls are quickly becoming a serious team to be reckoned with in the West.  After a subpar start to the 2014 spring club season, while looking to develop their program, the team has now added the right pieces and played together long enough to be a serious contender in every tournament they participate in.

The Magic Elite would prove just how much they have developed as a team this weekend - winning this year's Southwest Showcase Evaluation Prep Showcase, directed by successful valley event organizer Ron Coleman.  The event was held throughout the state and concluded at Moon Valley High School on Sunday, with the Arizona Magic Elite bringing home the tournament title after defeating several good teams on the day.

The Magic would defeat the Phoenix Flight in the championship of the event on Sunday.  The Flight had defeated a talented Team Bibby team in the semi-finals.

The team is coached by Tresa Reible, an assistant coach from Valley Vista High School.  Reible, a former college coach and a mother of a serious basketball family, has instilled toughness into her team combined with love and support.  Reible has developed a serious sense of family and commitment with her team through countless hours of teambuilding.  The hard work has paid off for Reible and her team, as they now prepare to travel to tournaments in Oregon and San Diego in July.

The team is led by the terrific guard play of Millennium High School’s terrific 5-foot-7 rising junior guard Raina Perez.  Perez’ ability to play the game of basketball at a high level has caught the attention of many people in the basketball community and has placed her name in the minds of basketball enthusiasts as an elite level prospect among the 2016 class.    As a mere sophomore, Perez would earn First-Team All-State honors by the Arizona Republic.  A special talent with the basketball in her hands, Perez is a big-time individual talent with a nose for the basketball, a highly developed feel for the game and an advanced skillset.

Joining Perez in the Magic backcourt is Valley Vista High School's 5-foot-8 rising junior guard Jordenn Reible, who has quickly emerged as one of the premier 2016 guard prospects in the state.  Now regarded as one of the elite guard prospects in Arizona’s 2016 class of prospects, Reible has shown the potential to play serious division-I basketball, and should garner loads of division-I interest over the next two years while competing on the spring and summer AAU/club circuit.

The combination of Perez and Reible is a force for the Magic backcourt, and should have many college coaches in hot pursuit over the next year.

Rising freshman guard/forward Rea Craig is also a gem, and a future elite high-major division-I prospect.  The young budding star prospect is quickly making a name for herself on the club circuit, and will enter the high school ranks next fall already receiving serious recruiting interest from the highest level of college basketball, as UCONN, Tennessee and many others have already began to show interest in her prospects for the future.

Rounding out this year's talented group are 6-foot rising senior Lauren Ames who has developed nicely into a prospect for the future at a smaller college program, 5-foot-8 rising senior guard/forward Jada Willingham who has emerged as a very nice wing prospect and Mountain Pointe HS 5-foot-10 rising junior Tilasha Okey who is among the most gifted prospects in Arizona's junior class.  5-foot-11 rising senior forward Sami Oliver of Valley Christian HS (CA) has provided excellent depth for the team, and she is a versatile talent that competes on both ends of the floor.   6-foot-2 rising junior post Eli Ozgur will also provide interior depth for this Magic group, and give them a formidable presence inside for the future.

It will be very interesting to see just how good this group performs this July.  regardless, there will be numerous college coaches paying close attention.