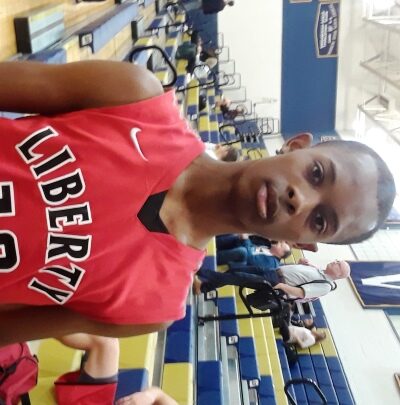 The AZ Finest Showcase took place this weekend at Inspire Courts and featured some of the state's top prospects on the day.  Organized by Tournament Director Michael Clark of AZ Finest Mixtape, this event annually has always been very good and consistently has showcased some of the state's top talent.  The event featured showcase games and an all-star game at the end of the event.

I was on hand for much of the action on Saturday and was very impressed with some of the featured prospects in the event.  Here are my top performers from the day (in no particular order) . . .

Ursery (pictured) may have been the top overall performer on the day.  This young man was awesome in his performance as he finished with a game-high 35 points in the all-star game, amidst top competition.  Ursery is a tremendous athletic talent with a very high motor and an ability to play at a very high level in the open floor.  He finished too many dunks to count on the day, and many back-to-back - showing an excellent motor and tremendous stamina.  Ursery is one of the state's best overall talents, but will need to go the junior college ranks before moving on.  If he can get it done in the classroom, he will have a very bright future ahead of him.

Nganga is new to the United States and also the state of Arizona, after moving from Angola this summer.  A big-time future prospect with a serious skillset and nice length and size already at such a young age.  He has an advanced skillset that allows him to play as a guard, and also play very effectively around the paint.  A prospect with loads of potential for the future and among the elite overall prospects in America's 2022 Class.

Terry is a long, rangy prospect with huge upside and a bright future ahead of him.  He has excellent length of body which allows him to make plays, and an advanced feel for the game from the point guard position.  He is fundamentally sound and has a nice overall skillset and feel for the game.  A bigger point guard prospect that loves to have the basketball in his hands and make plays for himself and others off the dribble.  An excellent passer of the basketball that sees the floor very well, and pushes the ball up the floor to the open man.  He has a solid shooting stroke with range.  Has excellent overall versatility as a player.

A native of Africa.  An athletic and skilled stretch 4-man prospect with a nice motor and a solid overall skill level.  Has a long, thin but very athletic frame that allows him to play well above the rim and finish strong around the basket.  He runs the floor hard and is a very good finisher in the open floor and around the basket.  Finished a monster dunk on the break with his left hand in the event.  He has good low post skills and a solid jump hook, and is also able to make shots from the perimeter from mid-range.  As he adds physical maturity he should see his game progress a great deal.  Needs to add serious size to his very thin frame to maximize his potential as a player.  An active rebounder and shotblocker.  An intriguing prospect with a lot of upside and potential.

Thomas has his best showing I have seen in some time.  He showed improved bounce off the floor, which was attractive.  Started off the all-star game with back-to-back dunks.  A long and lengthy forward prospect that is able to stretch the defense, but is at his best around the paint.  He has an ability to score inside and out. Runs the floor and finishes in transition.  Has generated numerous offers for himself lately, and looks like he may wait late before making his decision.

Cambridge is a super athletic talent that recently re-located to Hillcrest Prep.  A native of Tennessee, Cambridge is a tremendous athlete that plays well above the rim and finishes plays at a high rate in the open floor and while slashing to the basket.  He is a good overall scorer but needs to add more consistency to his perimeter shot over time to maximize his potential as a player.  A good defender that plays passing lanes.  Has serious potential as a player and is a kid that I would like to see much more of this season.

Artest showed off some improved athleticism in this weekend's event.  A skilled guard prospect with an excellent feel for the game, which allows him to make plays for himself and others off the dribble.  He sees the floor very well and sees plays before they happen.  Has a high basketball IQ.  Has an excellent handle of the basketball.  A very good shooter with range on his shot and also a nice mid-range game as well.  Coming off a strong summer performance for himself.

Hudgens is a nice guard prospect with a slick handle of the basketball and an ability to make plays for himself and others almost at will.  He plays with a high level of confidence and is not afraid to mix it up with any level of player.  A sure-fire scorer that is capable of making plays off the dribble or shooting the basketball with nice range on his shot.  He enjoys getting into the lane and finishing in traffic and over bigger defenders.  A nice guard prospect.

Stragalinos is a high-energy guard prospect with an excellent motor and a strong ability to score the basketball.  He is capable of playing both guard positions on the floor.  He has good size and length as a guard prospect, and a strong handle of the basketball, which makes him difficult for opposing defenders to defend.  This young man has a bright future ahead of him.

Wilson is among the state's top young talents.  While a point guard prospect, Wilson has superior athleticism and an ability to play well above the rim.  He is a unique athletic talent.  He is a tough and well-built physical guard prospect with a nice motor and work ethic.  He is a good shooter that has some range.  He is a strong creator off the dribble and an excellent finisher at the rim.  He is also a strong rebounder for his size, and an excellent defender that is capable of being a lock-down defender.  Has transferred to AZ Compass from Vista Grande HS.

This was the first time I saw Masi, and he is a very good looking younger prospect with some very good potential for the future.  He is a wide-body and strong young prospect with an ability to score around the basket and can step outside and shoot it as well with a nice, left-handed shooting stroke.  He runs the floor hard and is a good finisher as well.  I would like to see much more of this young man over time, as he has a lot of potential.

Thompson is a skilled guard prospect with a nice overall skill level.  He has a nice shooting stroke and can score with either hand at the basket.  Very good in transition.  A good ball handler and passer.

Thorson is a skilled point guard prospect with a nice overall skill level for himself, capable of handling the basketball and setting up teammates or scoring the basketball for himself.  He has a good shooting stroke with range, and is always tough to guard off the dribble.  A solid defender.  Pushes the basketball up the floor.  Has a lot of potential for the future.

Calmese is a smaller guard prospect physically but he is very skilled and has a nice knack for scoring the basketball.  He is an excellent shooter with range on his shot and is also a nice penetrator and finisher.  He is a skilled ball handler and passer that sees the floor.  A very good defender with quick hands and feet.  Has serious upside for a young guard prospect.