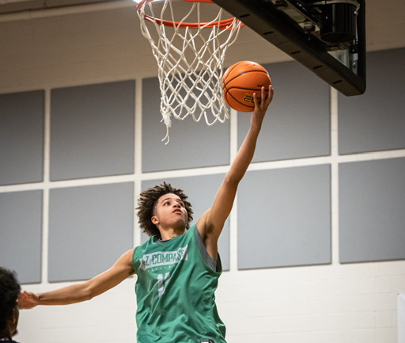 The AZ Compass Prep National basketball program continues to rise and soar, as if this program could do anything more. After setting out to build a top-rated national basketball program just a little more than (6) years ago, the AZ Compass program has quickly become a highly acclaimed and recognized basketball program nationally. After having several NBA Draft Picks, landing a big Nike Elite contract and reaching a previous #1 national ranking, the program is back on top nationally again, after a HUGE performance this week. AZ Compass Prep knocked off the nation's #1 program, Montverde Academy (FL), and then came right back to defeat #3 ranked Sunrise Christian (KS) in back-to-back contests, within the same week - making AZ Compass Prep now the consensus #1 ranked program in the country.

While AZ Compass Prep has had many Division-I prospects come through their program and had some amazing teams, this season is shaping up to already be the best installment for the program, as they have banded together as a team and program and locked up defensively - making it difficult for opposing teams to score the basketball and leading to numerous big victories already this prep season.

This year's National Team is simply different, as the team is again very loaded with high-major Division-I talent again, but this year's group is different, as the team does not have a clear scoring leader. Instead, the AZ Compass Prep National Team is very well balanced on both sides of the basketball, and the team simply plays to win basketball games through a collective defensive effort, which is very tough to compete against. Defense wins championships, and this group of lengthy, defensive minded individuals are doing it - holding Montverde to a mere 54 points and also Sunrise Christian to only 47 points in their two colossal wins this week. This is a serious accomplishment by the AZ Compass program, and will carry their team all season long. In both big victories, the team had a very well balanced scoring attack, as everyone seemed to contribute for the program.

While this team had a very well balanced attack, gifted 6-foot-6 senior guard Rayvon Griffith (University of Cincinnati Signee) and talented 6-foot-2 senior guard Jordan Ross (Saint Mary's College signee - pictured) were both selected as Game Most Valuable Players for their efforts in both victories. Either of the AZ Compass Prep players could have been afforded these honors though, as it was a collective group effort in both wins, but these two young men came up big in both contests.

Again, the tremendous and consistent success of the AZ Compass basketball program begins with it's leadership of Zy Owens and his mother and school owner Rhonda Owens. The Owens family and their school's faculty, which includes Swen Anderson, have been focused a great deal on building a basketball program that would help to bring more attention to the state of Arizona, and to their school. The program's coaching staff of Head Coach Ed Gipson, assistant coach Pete Kaffey and a very strong group of assistant coaches have more than carried the torch - recruiting an absolutely loaded lineup of players that marvels most High-Major Division-I programs. The coaching staff has also provided excellent leadership, coaching and consistent development of their players - preparing them for the collegiate level. This serious player development of players mentally and physically often goes unnoticed, but not by me.

The amazing exploits of the AZ Compass Prep program, and all the accomplishments of the prep schools in Arizona, have taken Arizona basketball to completely another level, which I am very proud and thankful for. As a result, the AIA and CAA organizations have also become stronger, in their attempt to create more opportunities for their players and coaches, and to keep up with the tremendous efforts of the prep schools. These prep programs are not for every player, as they have limited spots for top performers, but what they are doing is raising the national respect for basketball being played in our state. Is still continues to take time to develop the Arizona basketball culture, but the accomplishments turned in by elite programs, such as AZ Compass Prep, are raising Arizona basketball to new heights.

Congratulations again to the AZ Compass Prep National Team on an amazing season thus far, and a tremendous week, where the program is now convincingly the top-rated high school program in the land. What will this program do next?