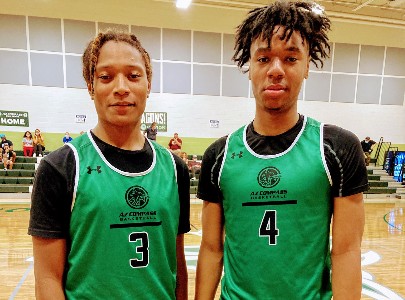 In the first official game on AZ Compass Prep’s newly renovated court, the Dragons took on their first test of the season against Desert Valley Prep. AZ Compass, led by the highly touted combination of senior guards Ty Ty Washington (pictured left) and Alden Applewhite (pictured right), came into the game as the 13th ranked overall team in the nation, and Desert Valley came in looking to shake up the prep hoops' world with their combination of tough guards and long bigs.

To begin the game, Desert Valley kept things close, behind the aggressive play of their lead 2022 guard Quis Davis, and the length of 2024 Center Khaman Maker. Quis Davis is a prospect to keep your eye on. He showed the ability to handle ball pressure, and attacked the rim to draw fouls on several occasions. Khaman Maker is a 7-foot thoroughbred who flashes a ton of potential. Even with these two talented players, Desert Valley Prep had no answer for the overall talent on the roster of AZ Compass Prep.

Early in the first half, the difference in athleticism began to show as AZ Compass began pressing after made baskets, which immediately resulted in Desert Valley turning the ball over for easy layups from Compass' guards Ty Ty Washington and Javon Small. AZ Compass' defense led them to a half-time lead of 41 to 14.

Going towards the second half, the depth of AZ Compass' roster was on display, as many of their guys scored easily in transition and did not let up on their dominance of the game.

The turning point in the second half was a huge put-back dunk from 2022 big man Adrame Diongue, which immediately hit social-media accounts after the game.

Overall, AZ Compass, led by 19 points from Ty Ty Washington, was just too much for Desert Valley Prep. They showcased their ability to switch everything on defense and transition from full-court defense to half-court, while rarely giving up easy scores. Offensively, they showed a completeness and the ability to score from all three levels as a team. The most impressive thing about this game is that they were able to efficiently run their half-court sets to create easy scores for multiple players. To have the ability to do this in your first official game is a testament to the work they have been doing in the gym.

The real test will be next week as AZ Compass Prep takes on Hillcrest Prep, which will be a battle of two Arizona prep powerhouses.