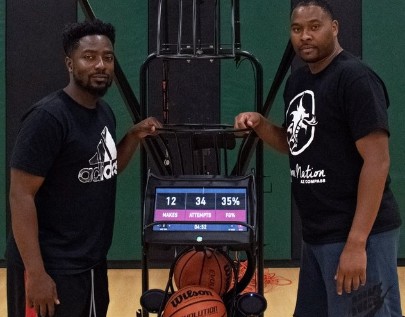 2020 was definitely a year to remember for many unfortunate reasons, but 2021 is already shaping up to be an excellent year for the AZ Compass Prep basketball program, and their school's faculty. After setting out to build a top-rated national basketball program just a little more than (5) years ago, the AZ Compass program has quickly become a highly acclaimed and recognized basketball program nationally. This season has been the best installment for the program, as they have been on an absolute tear all season long - compiling a very impressive 19-1 overall record. Last weekend they reached an even higher level, as the program traveled to Florida and impressed the nation's elite basketball scouts and media, and returned with a #2 National Ranking by Max Preps.

AZ Compass has been on the road a lot lately and last weekend the program headed to Florida as the #10 ranked team in the country. While traveling to take part in the Montverde Academy Invitational in Florida, AZ Compass would face #1 nationally ranked Montverde Academy (FL), who has not lost a basketball game in 44-straight games. Compass headed into the contest and the weekend looking to capitalize on their amazing opportunity to make more national noise. The program was already well respected, but their recent performance would change the game.

Compass would eventually fall to #1 ranked Montverde, 76-65, in a narrow overtime defeat, that would raise the eyebrows of the many writers and media in attendance. Compass would actually lead in the contest by (5) points with just over a minute left to play in regulation. Compass would then finish off the weekend while blowing out then #5 ranked Oak Hill Academy (VA) 78-51, and then shock the nation with an impressive 50-47 win over then #2 ranked Sunrise Christian Academy (KS). These two victories and a gallant effort against Montverde afforded AZ Compass a #2 national ranking.

The AZ Compass basketball program has waited for such national recognition, as they have officially arrived and are now mentioned among the very best high school programs in America. We must first clear this fact up. AZ Compass is not a true prep program, but rather a high school program, as they are a charter school by nature, and do not permit post-graduates to their school. They have a true school campus and classrooms with teachers and faculty. Among the local elite prep schools, Dream City Christian Prep and Bella Vista Prep are similar. As a result of this fact, AZ Compass is now seen as a recognized high school on Max Preps, and so they have received a #2 national ranking as a result. For some time now, basketball enthusiasts have recognized AZ Compass as a true prep program, but they are not. They are a charter school that chose to create a national program to compete against the nation's elite programs, while still having another very talented team that competes locally in the Canyon Athletic Association (CAA).

The tremendous and consistent success of the AZ Compass basketball program begins with it's leadership of Zy Owens and his mother and school owner Rhonda Owens. The Owens family and their school's faculty, which includes Swen Anderson, have been focused a great deal on building a basketball program that would help to bring more attention to the state of Arizona, and their school. The program's coaching staff of Head Coach Ed Gipson (pictured right) and assistant coaches Pete Kaffey (pictured left) and Jeremy Pope have more than carried the torch - recruiting an absolutely loaded lineup of players that marvels most High-Major Division-I programs. The coaching staff has provided excellent leadership and coaching to the basketball program, and worked hard to develop all of their players. The staff has also consistently brought in top-rated national talent all season long - organizing some of the best collection of talent seen on one high school program in history.

The AZ Compass Prep team is absolutely filled with Division-I prospects today, led by the play of stud senior guard Ty Ty Washington (Creighton commit), who has recently seen his national ranking among the 2021 Class soar as well. The program recently added 6-foot-8 senior forward DaRon Holmes (Dayton signee) and he has been plug-and-play for the program, taking the team to an even higher level. Both Washington and Holmes are now McDonald's All-American hopefuls, and strong candidates. The team is loaded with other top-rated Division-I prospects as well, making it difficult for all of them to play their desired minutes each night, but Coach Gipson and his staff have made it work, and the team is playing as a complete family these days - all happy to be a part of something special.

Wednesday evening, the AZ Compass Prep returned to their natural home - The Grind Session at The Phhacility. AZ Compass would play very inspired basketball as a team, and would completely dominate a troubled Bella Vista Grind Session team that has struggled throughout the season. After numerous big plays and dunks, AZ Compass would cruise to an impressive 99-48 victory, in a game that was more of a celebration and exhibition of their recent accomplishment as a program for the fans in attendance.

I wrote it more than (5) years ago that prep basketball was in the process of completely changing the basketball landscape in Arizona as we know it. Well, it has truly happened now, as numerous prep programs in Arizona have raised the level of basketball in the state by leaps and bounds, and now AZ Compass Prep has taken it to an even higher level.