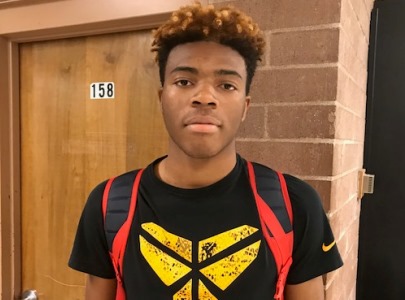 While many people celebrated a day off on Monday for the Martin Luther King Jr. holiday, it was more of a day on for the talented prospects from AZ Compass and Bella Vista Prep.  Both teams would match-up in an exciting contest that was very high-level that included numerous high-level division-I prospects, and a crowd filled with important members of the Arizona basketball community - making for a very exciting game.

It was a high level contest on Monday evening, and was filled with the most talent that I have seen on one court in Arizona for a high school game, in a long time (outside of the Hoop Hall West event).

With the game being played at AZ Compass and with loads of excitement in the air and a high level of intensity being displayed on the basketball court, both programs were up for the match-up, after an earlier season match-up came down to a one-point win for Bella Vista prep, on their home floor.  AZ Compass would look to do the same on their own home floor.

But Bella Vista would be game to win on the road and make a serious statement, as they came out immediately and took a big lead in the game.  Bella Vista would jump out to a fast 10-0 lead in the contest, after a layup from 6-foot-4 junior combo-guard Nicolas Elame, a dunk in transition by 6-foot-7 star junior wing Terry Armstrong and a 3-pointer from 5-foot-9 junior guard Julian Dozier.

The first half would absolutely belong to Bella Vista, as their offense was flawless, and the AZ Compass defense did very little to stop them or slow them down.  After consecutive transition dunks by Armstrong and Elame, Bella Vista would go up 21-3 with 14:16 remaining in the first half.

AZ Compass Prep's 6-foot-6 senior guard/forward Both Gach is the state's top unsigned 2018 prospect, and he would prove it on Monday evening.  A strong transition dunk by Both would give AZ Compass some life with 9:58 left to play, but nothing could slow down Terry Armstrong in the game's first half.  Both players would accept the challenge facing them and go at it for much of the game.  A three-pointer by Armstrong, would be followed up by a three-pointer from Gach.  Gach would then convert a mid-range jumper in transition.

Armstrong would then ignite - scoring numerous consecutive baskets to put his team firmly ahead going into the half.  A three-pointer from Armstrong from the wing, a three-point play on a floating runner, an alley-oop dunk in transition and another three-pointer to end the first half, would give Bella Vista a nice 51-39 lead at the half.

AZ Compass would survice a game-high 25 point first half from Armstrong, and would remain in the game - just enough to get things going for themselves in the game's second half.

AZ Compass 6-foot-3 senior guard Dwayne Walker is also among the best unsigned senior prospects in the state, but he would get off to a slow start in the first half behind foul trouble.  Walker would start the second half on absolute fire, and bring his team back quickly.  :05 seconds into the second half, Walker would knock a nice three-pointer from the corner.  He would then convert a strong drive to the basket and then connect on another three-pointer to pull Compass to within 4 points of Bella Vista.

Both Gach would then take over and knock down (3) consecutive big three-pointers in transition, and then finish a nice driving basket around a defender to put Compass ahead 67-56  with 10 minutes left to play in the game - a complete opposite and different performance for both teams in two halves.

After a three-point play in transition by Armstrong, 6-foot-5 sophomore guard Seth Dawson would convert a couple nice baskets inside for himself to keep AZ Compass ahead.  After another nice driving layup from Jalin Anderson with :45 second left to play, AZ Compass would eventually pull out the hard fought 98-95 victory at home.

Both Gach would lead his team in scoring with 21 points in the win, while Jalin Anderson finished with 20 points, and Dwayne Walker finished with 18 of his own to lead AZ Compass.

Terry Armstrong would turn in a serious performance in the loss - finishing with a game-high 40 points for Bella Vista, while Julian Dozier would finish with 20 of his own.

Scouting Notes:  Bella Vista Prep 6-foot-7 junior wing Terry Armstrong is a tremendous talent and proved Monday evening why so many high-major division-I schools are already on him hard, and have extended offers.  Armstrong is ultra-long and can get his shot off with the best of them, while also being able to play with a high motor without running out of gas.  He is a highlight reel dunker and has a tremendous handle of the basketball also for his size, which allows him to make plays for himself and others.  A big-time talent that will continue to flourish.

AZ Compass Prep 6-foot-6 unsigned senior guard/forward Both Gach is set to blow up this spring.  Many college programs have not show him serious interest, while they are waiting to see how he does academically.   Gach is on track to qualify this spring, which should make his college recruitment very interesting, as loads of division-I programs begin to become aware of this unique talent.  Virginia Tech, Oklahoma and Gonzaga have recently shown serious interest . . .

Bella Vista Prep 6-foot-8 senior forward Giir Ring is another great addition to Arizona's senior 2018 class.  The skilled combo-forward prospect is a nice talent with a versatile ability to play inside and out.  He has a strong handle of the basketball, a good shooting stroke with range and good overall athleticism and versatility.  Ring is a nice talent for the spring and ranks now, by our staff, among the very best available 2018 prospects in the state . . .

Bella Vista Prep 6-foot-4 junior combo-guard Nicolas Elame just received a scholarship offer from UC-Santa Barbara.  Elame is a nice athletic talent with a nice overall skillset and ability to play both guard positions.  One of the better guard prospects in the West for the 2019 class.