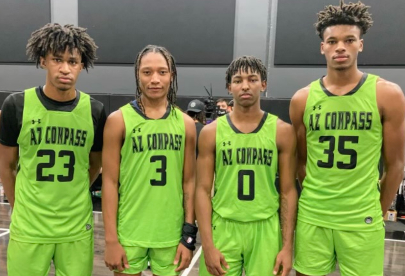 AZ Compass Prep (28-2) saw the end to an historic season today in the GEICO Nationals in Fort Meyers, Florida, after falling in narrow fashion to the nation's #1 ranked team and program, Montverde Academy (FL). After a last-second missed shot attempt bounced off the rim at the buzzer for AZ Compass, Montverde would hand AZ Compass their mere second loss of the season, with both season losses coming at the hands of Montverde. While Montverde would move on to advance to the GEICO National Championship game, Compass Prep would finish among the top four high school teams in America this season, and would bring loads of respect to Arizona basketball, but, most importantly, to AZ Compass Prep.

AZ Compass Prep, who just started their National Basketball Program just (6) years ago, was the #1 ranked high school team in America this high school season, won a National Championship on the Grind Session, and played two consecutive games on national television on ESPN in the GEICO Nationals this week. The AZ Compass Prep program has had an historic season for 2020-2021, and it definitely won the hearts over of our Arizona Preps' staff. Watching AZ Compass Prep the past two days on ESPN playing at the highest level on national television, made me proud. A small charter school from Chandler, Arizona, that has worked tirelessly to build a National program, is well deserving of all of the attention and fanfare they received this season.

Led by the terrific play all season long of the nation's top point guard prospect (in my opinion), 6-foot-4 unsigned senior point guard Ty Ty Washington, the AZ Compass Prep program quickly made believers out of everyone this high school season. Washington was the catalyst all season long, as he was in rare form every night and all season - turning in some of the best performances this season that I have ever seen. Solely on the back of Washington, AZ Compass Prep was on fire all season long. They beat everybody, including Sunrise Christian (KS), BFL Prep (CA), Oak Hill Academy (VA), Wasatch Academy (UT), Prolific Prep (CA), Dream City Christian, Our Savior Lutheran (NY), Central Pointe Christian Academy (FL), and almost Montverde, twice. Montverde had not lost an actual game in years, but this AZ Compass Prep team took them into overtime during the high school season, and, on Friday afternoon, came back from being down double-digits in the game, to take the lead late in the semi-final contest. AZ Compass, just like their first match-up with Montverde, seemed to have the game under control late, only to fall in a close game. And just like all season, Washington would pull off some late game heroics to give his team a chance, but only to have his long-range three-pointer misfire over the outstretched hands of a Montverde defender.

As Washington walked off the floor after the game, and very emotional, I could feel his emotion, as I became emotional thinking what if Washington's three-pointer had fallen, as it had all season long. In every big game, in every big moment this high school/prep season, Washington's shot fell every time. Ty Ty either scored the winning basket or set up one of his teammates for a winning assist. Ty Ty had become an absolute magician all season long and it became expected that whenever AZ Compass Prep needed him to, he would save the day. So when his three-pointer missed the mark on Friday afternoon, and the season ended for Compass, it felt like a dream that had become reality all season long, had come to an end.

In the process, AZ Compass Prep proved many things, while proving that Arizona basketball is absolutely on another level now, as I have been promoting for years. Most basketball enthusiasts have only heard how good it is, since they have not actually been able to see it with their own eyes, especially during the pandemic. But on Thursday and Friday afternoon, everyone had the opportunity to see first-hand just how good Ty Ty Washington truly is, and how good the AZ Compass Prep program is as well - able to compete toe-to-toe with every top program in America.

While Arizona basketball enthusiasts have never been known to fully support one another or promote one another, our staff at Arizona Preps is simply all about Arizona basketball, and we applaud the season and the efforts of AZ Compass Prep - standing ovation. I was super proud of what Ty Ty Washington and his amazing teammates did all season long for my state's basketball reputation, and found myself emotionally involved at a high level over the past two days, as they tried to win a National Championship. Thanks for an historic season.