AWC’s Medford on a tear this season 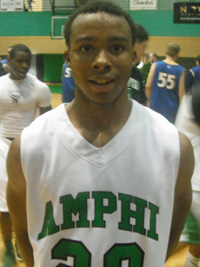 Ranking among the scoring leaders in the conference this season, Medford has helped his Matadors to a 17-4 overall record and a high-major division-I billing for himself.

Currently, Arizona Western ranks third in the ACCAC with a record of 8-3, while ranking #2 in the conference among division-I junior college programs (Cochise JC ranks in the top spot).

Medford's play has been a big reason for the success of the Matadors this junior college season, as he has provided head coach Charles Harral with a serious one-two punch - teaming up with talented 6-foot-9 sophomore post Renan Lenz for the Matadors. While Lenz entered the junior college season as the team's primary focus for opponents, Medford has stole the show - ranking 6th in scoring for the conference with 17.5 points per/game. Medford also ranks 7th in the conference in assists with 5 assists per/game, and also second in steals with 2.3 steals per/contest.

As a result of Medford's play this season, he is now regarded as a high-major division-I college prospect. Recently, while University of Oregon and Baylor University were in attendance for a game to catch a glimpse of Lenz, both programs walked away with interest in Medford, after the talented guard prospect put on a scoring exhibition in a narrow loss over the holidays to Three Rivers Community College (MO).

While Medford will need to first graduate from Arizona Western JC before moving on to the division-I level, look for him to have his share of schools to choose from - as long as he gets it done in the classroom.

A graduate of Tucson's Amphitheater High School, Medford had an excellent high school career for head coach Ben Hurley - leading his team to an amazing 29-2 overall record in his senior season and a 4A Division-II State Championship.

Medford was one of the better talents in Arizona's very talented 2011 class, and, since graduating high school, has raised his recruiting stock a great deal at Arizona Western.

Arizona Preps Scouting Report: Medford is an excellent penetrator that drives the basketball down the floor and puts serious pressure on opposing team defenses with his ability to get into the heart of the defense. A combo-guard, Medford is capable of playing both guard positions on the floor, but seems to be at his best from the point guard position, where he is able to handle and distribute the basketball to the open man on the floor. From the scoring guard position, he is a big-time scorer with an excellent jump shot with range and a quick trigger. Medford is a strong ball handler and is capable of getting almost anywhere he wants to on the floor - a nice attribute of any guard. He is also a very good finisher around the basket, and does not mind physical contact. Defensively, Medford has excellent lateral quickness and is capable of becoming a lock-down defender. This is his best quality as a college prospect. Especially since lock-down defenders are so hard to come by in this day and age of college prospects. An excellent guard prospect with excellent toughness and a strong, division-I ready body.