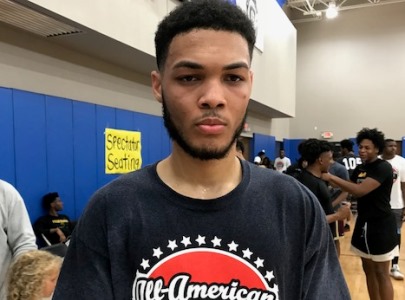 After re-opening his college recruitment from the University of Buffalo, after former Head Coach Nate Oats left to take a job at the University of Alabama, Arizona Western Junior College 6-foot-9, 210-pound sophomore forward Andre Allen decided to review new options for his future.  As a result, Allen saw his college recruitment soar this spring, as many high-major division-I programs began to focus on his talents.  After a nice recruiting process for himself, Allen has decided to sign a national letter of intent with the Arizona State Sun Devils and Head Coach Bob Hurley and his staff.

While Hurley is still in the process of solidifying his coaching staff for next season, his current staff found time to reel in one of the hotter junior college prospects in the country.

Allen had received numerous offers throughout his new spring recruitment, including his biggest offer from the University of Florida.  Florida seemed like a difficult program to overcome, but, in the end, the Sun Devils won out and reeled in the athletic juco forward prospect.

Allen was regarded as one of the top sophomore JUCO prospects in the West this season, and one of the elite prospects in the ACCAC conference.  Allen had a strong sophomore season, helping lead Arizona Western JC to a conference title in the ACCAC.  On a very talented team of college prospects, Allen averaged modest numbers this junior college season - averaging 10.1 points and 5.7 rebounds, while shooting 56% from the field.  He could have put up much better numbers, but on a loaded team he was not asked to by Head Coach Charles Harrell.

Allen is a long, lengthy and athletic stretch 4-man prospect that plays athletic and is a strong finisher at the rim.  He runs the floor hard and is a good slasher and finisher in the open floor.  He can score inside and out, and has a solid shooting stroke with range, which keeps defenses honest.  His promise as a college prospect is glaring and he is a nice addition to any college program looking to add versatility to their frontcourt.

Congratulations to Allen and his family and to the Arizona Western program on this amazing accomplishment by Allen.  We wish him the best and a fine college career from our Arizona Preps staff.

Arizona Hoop Review Scouting Report:  Allen is a long, lengthy, and athletic versatile forward prospect with a good approach to the game, which allows him to get a lot done on both ends of the floor.  He is a no-nonsense prospect that makes basketball plays and looks to play with a purpose.  He runs the floor hard and is a good finisher in transition, and also makes plays for himself and others in the halfcourt set.  He is an excellent finisher around the paint and gets to the free-throw line often as a result of his activity around the basket.  Attacks the rim with vigor.  He is a capable shooter of the basketball out to three-point distance, but is at his best from mid-range and in the post.  He has very good overall versatility as a player.  He is an active rebounder that rebounds outside of his area.  He is a very good shotblocker with very good timing.  A capable ball handler.  A very good passer that finds the open man on the floor out of the post.  A very good sleeper juco prospect.  A native of Los Angeles, California, where he attended Balboa City School.