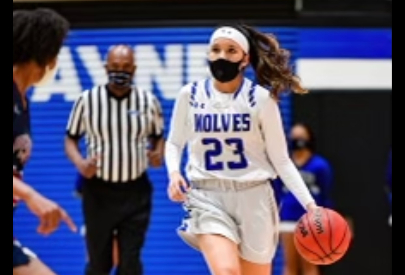 Autumn Rodriguez is a very good basketball player at Chandler High School - standing 5-foot-7 and playing the shooting guard position. Autumn credits her mother, who inspired her to play the game she loves today.  Autumn comes from a family who plays basketball. Autumn was very happy about her past season, where her team made the playoffs, and she played a huge part of her team getting there.

"I was disappointed with my team and I not getting to the finals, but we had a great season, and I really enjoyed this team," said Rodriguez.

Autumn was described from Head Coach A.J. Greenough as a "great shooter, rebounder, and is learning how to defend at a high level."

Autumn feels that as a player, some of the intangibles that makes her stand out from other players is her loyalty to her team, and the braveness she shows on the court by running after loose balls, and taking the challenge in defending the opposing team's best players.  She also possesses good defensive instincts, and has been one of her team's leading defensive players. Autumn feels that she can improve her speed and ball-handling skills, in which she consistently is working on during the off-season. She feels that she is becoming more of the vocal leader on the team.

Autumn was awarded the "All CUSO Honorable Mention" in the 6A's Premier Region.

Autumn's favorite basketball player is Michael Jordan, because she feels as though he is the best basketball player she has seen. "Michael Jordan is a great player, and what I took most from his game is that he persevered through tough times and moments," said Rodriguez. "My mother also has helped me to become the player I am today, because she taught me how to be confident and what it takes to succeed as a player and most importantly as a person."

"Coach Greenough is a great coach, he knows you as a player and a person, and he challenges me to work harder each and every day, and that is why I love Coach Greenough," said Rodriguez.

Rodriguez has aspirations to work in the medical field one day, possibly as a nurse.
She currently holds a 3.8 grade point average, and was recognized as a Chandler High School Honors Scholar, a National Honor Society Inductee, and is a member of the International Baccalaureate Middle Years Program. In 2021, she also received the 2021 Principal's Academic Honors Award.

Besides playing the game of basketball, Autumn is a great person.

"If people get to know me, I am very friendly.  I enjoy volunteering in my community and helping others," said Rodriguez.

Autumn currently has an offer from the University of the Southwest.