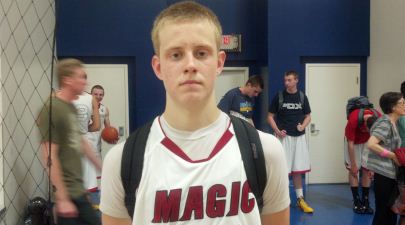 One of the lesser known prospects in the state resides in Tucson, Arizona.  Like many of Tucson's top prospects over the years, Catalina Foothills High School's 6-foot-3, 165-pound rising junior guard Austin Nehls has flown well below the recruiting radar until this summer when Nehls showcased his ability to play the game in front of numerous college coaches.

While playing for a talented Arizona Magic Pump N' Run-2014 squad, Nehls was able to prove that he is quite able to compete with the best talent around and against tough competition.  While traveling with the team to NCAA certified tournaments in Los Angeles, CA and also in Vegas, Nehls proved his ability to play the game.

This past season, Nehls put up excellent numbers for himself as a mere sophomore for a Catalina Foothills team that finished with a 21-10 overall record in the state's Division-II Class.  Nehls led the team in scoring with 17 points per/game.  Nehls also averaged 4.3 rebounds and 2.9 assists per/game on the season.

As a result of Nehls' performance this summer, he is now generating recruitment from several low-major division-I programs.  While he looks to be best suited for a smaller college program, Nehls' play this summer made him into an intriguing prospect.

Nehls is an excellent shooter of the basketball with nice range on his shot and a quick release.  His ability to shoot the basketball makes him a threat from anywhere on the floor, which sets up his ability to put the basketball on the deck and make moves toward the basket.  Nehls has a solid mid-range game which allows him to make plays for himself or others when defenders extend to contest his shot.

Nehls is a good ball handler and passer, but is at his best from the shooting guard position where he is able to score the basketball.  He is a good team defender but still needs to work to improve to become a better one-on-one defender.  He does a good job of rebounding the basketball for his size, but continued focus in this area of his game will allow for him to develop as a prospect.

Nehls will return this high school season for head coach Mark Felix and team up with 6-foot-5 junior forward Chaz Mack to give the Falcons a nice one-two punch for the 2012-2013 high school basketball season.