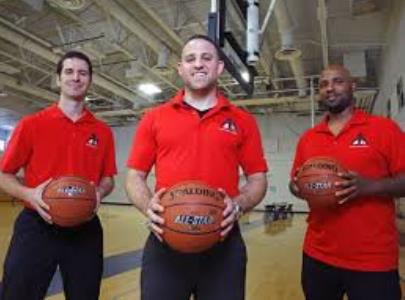 On November 18-19 2016, I was able to attend Aspire Basketball Academy’s 1st Fall Classic.  It was a great event from start to finish with many of the top prep players on the West Coast in attendance. I would like to thank National Team Coach Jeremy Kipness, Post Graduate Coach Derek Olich and the rest of the Aspire Basketball Academy Staff for their hospitality this weekend and I really look forward to seeing them, as well as their teams this upcoming season.

Of the games I personally watched, here are some evaluations and notes:

2017 6’9 190 Lbs. S/PF Nik Mains: Mains was very productive in each of the games that I saw him compete in and looks to have grown since last year at Pinnacle (Scottsdale) H.S. Mains has really developed a great back to the basket game and has soft hands/ a good touch over both of his shoulders.  He also can legit drag out to the 3-point line and is very effective in catch/shoot situations.  Once he puts on more strength in the post and can muscle thru contact better, he will be a steal late.  He current holds and offer from St. Bonaventure University and interest from UTEP, Columbia, and Princeton.

2017 6’1 165 Lbs. CG Isaac Etter: Etter was the best shooter on the weekend hands down.  He was able to hit shots in a great variety of ways (catch/shoot, drags, flairs, stepping behind defender, etc) and shot it at a very consistent clip.  He is also explosive off of the bounce and was able to get in the lane and score.  He also has a good floater in traffic and was able to score efficiently over bigger defenders.  He current has interest from New Mexico, Iona, UTEP, Indiana University-Fort Wayne, and the University of Idaho.

2017 6’5 190 Lbs. SF Harrison Hillard: Hillard is a very athletic slasher who jump shot from the mid-range area looks to have improved a lot since playing last season at Shadow (Phoenix) Mountain H.S.  He is great in transition as he finishes plays with big dunks and is able to bully defenders once at the basket due to his upper body strength.  His length also causes some issues on the defensive end when he gets his hands in passing lanes.  I look forward to seeing Hillard play much more as the season goes on.

2017 6’10 230 Lbs. C Jovan Drljaca: Originally from Belgrade, Serbia, Drlijaca is very good on the defensive end.  He is mobile, makes good reads on defensive and causes issues for more athletic post players due to his pure height when he puts his arms straight up. While raw on the offensive end, he has solid hands and is able to score well with his developing posts moves.  Once he gets adjusted to the speed/ pace of the game, Drljaca will be a very talented post player. He currently holds interest from Long Beach State, Nebraska, Rutgers, and other schools as well.

2017 6’4 195 Lbs. SG Lovro Bulesic: After just transferring into the school from Pula, Croatia, Bulesic had a great weekend for himself shooting the Basketball. He was very consistent in catch and shoot situations and was able to create space well and hit some midrange jumpers from the elbows. He was quick off of dribble as well and had some tough finishes around the basket.

2017 6’4 185 Lbs. SG Drake Gavin: Gavin was one of the best catch and shoot guys I saw during the weekend. Can really fill it up from the outside but hit some tough shots from mid-range as well. Very solid shooter and would be very handy in zone type situations. Good defensive principles as well and rarely had offensive players get by him.

2017 6’10 190 Lbs SF/W Makhtar Gueye: A UAB Signee, Gueye is as a talented as a wing prospect as there is on the West Coast and the country.  At 6-foot-10, he is able to do very similar things that to of Kevin Durant scoring the ball from the wing.  He is able to create space very well with foot jabs/ head fakes to get shots off on defenders (shoots ball at a great clip from 3) and is capable of putting the ball on the deck and getting to the basket due to his long strides and completing an athletic finish (big dunk or finishing thru contact).  Gueye is also very athletic and he had some big dunks in transition on the weekend and caught some big lobs. (Almost dunked over one big as well) He runs the floor very well for someone his size on the defensive end and had some huge chase down blocks on the weekend.  Gueye gets down on himself sometimes when things do not go his way in reference to scoring, but once he gets that piece in check, he will be a force to be reckoned with Conference USA next season.  Very talented kid and great person off of the court as well.

2017 5’10 160 Lbs. PG Milton Wordlow III: Outside of Gueye, Milton could have been the prospect that really impressed me the most on the weekend. With the heart of a Lion, Wordlow really does whatever he has to do on the court for his himself and his teammates to come away with a win. He has a very capable mid-range pull up and can hit a variety of shots from the 3 from different situations but is best when he puts the ball on the deck first and steps into his shots.  He is tough as nails when he drives to the basket and can finish through, around, or over defenders with a great variety of offensive tricks he has in his bag. He has a great IQ as well and looks to get his teammates involved in pick and roll situations and looks for open guys once he breaks down defenders off of the dribble. He sits down and defends with the best of them and had multiple steals in the games I saw him play. Windrow is a very tough city guard from Chicago and has very similar offensive/ leadership tendencies to that off former UCONN great Shabazz Napier. I truly look forward to seeing him compete more and more this season. He is a coach’s dream. He currently holds offers from Florida International, Illinois-Chicago, Chicago State and has heavy interest from Loyala-Chicago, New Mexico State, Saint Louis, UTEP, and Idaho.

2019 6’0 170 Lbs. CG Jim Gietz: Gietz could be the best pure shooter Aspire’s National team has. Originally from Hamburg, Germany, Gietz can truly hit shots from all over the floor and reminds me of current Southern Utah signee from Arizona, Dre Marin.  Nearly every shot he took, he hit (catch and shoot guy/ has good side-step to create space) He also pushes the ball in transition and looks up for open cutters who are in a better situation to score than he is.  He also competed with the U16 German National Team this past summer.

2018 6’1 175 Lbs. PG Bryce Meadows: Meadows is a tough competitor who is a very steady floor general. He also makes the right play and rarely makes turnover when the ball is in his hands. He is a solid shooter of the ball as well and can knock down some 3’s but looks at his best when he puts the ball on the floor and hits mid-range jumpers from the elbow.

2019 6’7 185 Lbs. SF Dane Quest: Quest is as intreaging of a 2019 prospect as there is in the State. A very long wing, you can tell that Quest has his best basketball ahead of him and has huge upside as a player.  Quest looked as his best when he was able to attack the Basket from the wing and finish thru contact from bigger, more physical bigs (has great body control/ doesn’t back down from anyone). While he shooting mechanics are not the best at this time, he does have good lift on his jumper and was able to knock down some 3’s when the guards were able to drive and kick out to him. His length on the defensive end caused some issues for offensive players and he was able to get some blocks. Quest is someone who I will be watching very closely as he continues to take strides towards being the player I think he will develop into thru the help of the Aspire Coaching Staff.

2019 6’4 175 Lbs. PG Joel Brown: Brown is one of the best passers of the Basketball in the State regardless of class, and is one of the best players as well. From Brampton, Ontario, Canada and competing with CIA Bounce, Brown has very similar vision and passing ability to that of former University of Washington PG Tony Wroten Jr. (Both bigger PGs) He almost never committed a turnover on the weekend and always seems to put himself and his teammates in the best situation for them to score the ball. (threads the needle to cutters/ looks for shooters on the wing very effectively as well) He has good handle on the ball but what is more to be about Brown is how good he is once he gets by defenders and gets into the lane/ his blinding open court speed with the ball in his hands. Once he sees a little bit of daylight thru defenders, he will get through the hole like a RB and get to where he wants to be in the lane. (setting himself up for an easy score/ another chance for him to find open teammates) Brown also hits some very tough, aerobatic finishes through/ over defenders and looks to thrive off of contact. (solid FT shooter) While outside/ mid- range shooting may not be his best asset yet, he has a solid release point on the ball and really does not have to settle for jumpers due to how elusive he is with the ball/ his ability to get to where he wants to go in lane/ mid-range area. Brown is truly an Elite Level prospect and will be a national ranked player down the road. He has an offer from Rutgers and has interest from California, and New Mexico.