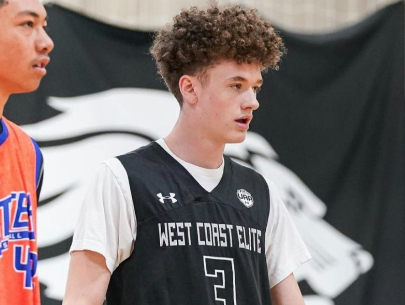 Arizona's 2023 Class of prospects is absolutely loaded in the state - filled with many talented prospects. This class looks to be the most impactful class of players for college coaches to absolutely scour and recruit, as there are many gifted prospects that will make an impact at the colleges of their choice over time. One prospect that is on the rise in the class, after having a strong performance this past spring and summer, and has gone to another level through his hard work on and off the court is Pinnacle High School's 6-foot-5 junior wing Ashton Reese. Reese is among the best pure shooters of the basketball in the class and has excellent size for a wing shooter. He has become one of my favorite prospects in the class.

A native of Washington, Reese moved to the state of Arizona for his sophomore season, and has developed a great deal over the past year. Reese has excellent work ethic and is a gym rat, always working on his craft and his body to reach his goals at the collegiate level. After spending his sophomore season playing for AZ Compass Prep, and playing against top-rated competition all season long and alongside other top-rated performers, Reese then played for the highly-acclaimed West Coast Elite (CA) club program this past spring and summer, where he was among the top overall performers and best pure shooters of the basketball on a very talented WCE 16U team that played at a very high level and against top-rated competition throughout the club season. Reese would lead a very good group of 2023 prospects in 3-point percentage all club season, while traveling all over the country on the Under Armour Circuit - gaining maximum recruiting exposure and playing against some of the best basketball talent in America.

Reese is a sure-fire college talent, as he has excellent size as a shooter and a pure, quick release on his shot with unlimited range, which makes him a very attractive prospect at 6-5 in height. Rarely do you find prospects with Reese's combination of skill and size, and he is also very athletic off the bounce and can finish strong at the rim over defenders. He stretches defenses with regularity, making him difficult to defend, as he is also able to put the basketball on the floor and create scoring opportunities for himself and his teammates. He is fundamentally sound and has a nice overall offensive skillset, which should only continue to blossom over the next two years of high school basketball - in preparation for college. He is also a very good ball handler and passer that sees the floor, and looks to find the open man, a nice facet to his game.

Reese is also an active rebounder, although he should only continue to improve in this area of his game over the next two seasons, as he continues to get physically stronger. He will see great growth in this area of his game over time, as he has worked very hard in the weight room on his physical size and strength, and on his explosiveness with top-rated local trainer Sidd Sharma, who is the best in the business and also works with many NBA players and prospects. Sharma has raved to me about Reese and his development over the past year, which speaks volumes for this young man and his progression.

Currently, Reese is hearing from numerous college programs, and has been contacted by many Division-I programs, such as UC-Irvine, George Washington, UC-Riverside, UC-Davis, Northern Arizona, Air Force and many others. He does not currently have an offer to his credit, but that will soon change next spring and summer, as he should become one of the hotter prospects in Arizona's 2023 Class. Reese and his family are just waiting for their first offer to pop, and then I would expect many others to follow, as he is a very nice package for a college program.

Coming from a basketball culture in Washington and a very athletic family, Ashton has excellent basketball bloodlines and a true love for and understanding of the game. He has played the game for much of his life and has seen the best competition and performed at a high level against the best out there for some time. He is just now beginning to come into his own this high school season.

Reese is also an excellent student and will have no problems becoming a full academic qualifier over time, which also makes him an even more attractive prospect.

Reese is currently putting up very good numbers during his junior season, and has helped lead a very talented but young Pinnacle team of talented prospects to a 5-3 overall record thus far in the state's top 6A Division. Pinnacle has won 5 of their last 6 games on the season, so they are heating up as a team. This Pinnacle team will continue to gain valuable experience this season in preparation for a nice state playoff run, and will become an absolute problem next season. This Pinnacle group is one to watch in a tough Desert Valley Region, and will only continue to get much better as the season progresses, as will Reese.

I will continue to follow Ashton Reese this high school season, as he and 6-foot-1 junior guard Bryce Ford continue to lead a young Pinnacle team to the top of the standings, and will look to bring you any recruiting updates for Reese as they continue to develop.