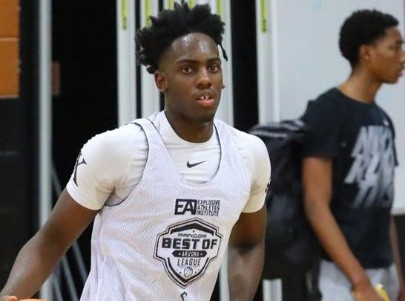 Dream City Christian Prep gifted 6-foot-7 senior forward Arthur Kaluma signed a national letter gave a verbal commitment to UNLV this fall in surprising fashion, after being being recruited heavily by many high-major college programs across the country. Recently, UNLV made a coaching change, and now Kaluma is considering his options again for next fall. While he is still signed to a national letter of intent with UNLV, he could elect to do something different, if he chooses.

As a result, many college coaches are waiting to see what Kaluma will decide for his future, and if he will elect for getting a release from his current pledge and re-open his college recruitment.

Kaluma is rated as one of the elite prospects in America's 2021 Class, and has received his large share of high-major Division-I college recruitment, as a result. During his initial college recruitment, Kaluma had numerous high-major offers for himself and had trimmed his list of schools down to Kansas, Syracuse, Oklahoma, Arizona State, Arkansas, USC and Texas A&M, before deciding that UNLV would be his college home - giving a big verbal pledge to former Head Coach TJ Otzelberger and his men's coaching staff. Otzelberger recently transitioned to Iowa State University, and Kevin Krueger has now been named the new head coach at UNLV. While Krueger has a lot on his plate currently, after taking over the UNLV program, but one of his top priorities now will be making sure Kaluma suits up for the Runnin' Rebels next season.

According to the Dream City Christian coaching staff, it is still unclear as to what Kaluma will do for college next fall. He currently does not have a clear leader at this time, and, of course, has not ruled out still going to UNLV.

Kaluma is regarded as one of elite combo-forward prospects in the country. A versatile and skilled wing prospect with excellent toughness and athleticism, and an ability to score from anywhere on the floor. Kaluma's versatility makes him very attractive, as he is able to handle the basketball in the open floor or in the half-court set and makes plays for himself and his teammates. He is a very good shooter that has added serious range to his shot over the past two seasons, and can score from the low post as well, where he is able to finish strong around and at the rim. A very good scorer in transition. A strong slasher and finisher. Kaluma is a strong rebounder also and plays bigger than his size suggests, as a result of his length and strong finishing ability.

I will continue to follow this story closely, and bring you any updates as they continue to develop.