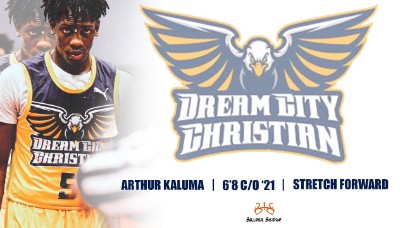 Dream City Christian Prep is one of the elite prep programs in the country, and 6-foot-7 senior forward Arthur Kaluma has been a major reason for the program's success over the past two seasons. Kaluma is rated as one of the elite prospects in America's 2021 Class, and has received his large share of high-major Division-I college recruitment, as a result. This week, Kaluma decided to pull the trigger for the early fall signing period - giving a big commitment to the UNLV men's basketball program.

Kaluma had numerous high-major offers for himself and had trimmed his list of schools down to Kansas, Syracuse, Oklahoma, Arizona State, Arkansas, USC and Texas A&M, before deciding that UNLV would be his college home - giving a big verbal pledge to Head Coach TJ Otzelberger and his men's coaching staff.

Kaluma is an excellent addition for the UNLV program, as he is regarded as one of elite combo-forward prospects in the country. A versatile and skilled wing prospect with excellent toughness and athleticism, and an ability to score from anywhere on the floor. Kaluma's versatility makes him very attractive, as he is able to handle the basketball in the open floor or in the half-court set and makes plays for himself and his teammates. He is a very good shooter that has added serious range to his shot over the past two seasons, and can score from the low post as well, where he is able to finish strong around and at the rim. A very good scorer in transition. A strong slasher and finisher. Kaluma is a strong rebounder also and plays bigger than his size suggests, as a result of his length and strong finishing ability.

Kaluma will now look to sign with UNLV during the NCAA Early Fall Signing Period, which began November 11th and will conclude November 18th. The late (Regular) signing period for Division-I basketball recruits will begin April 14, 2021, and conclude May 19, 2021.

Congratulations to Kaluma and his family, as well as the Dream City Christian Prep coaching staff on another amazing commitment and a tremendous accomplishment by this young man for his future from our Arizona Preps' staff.