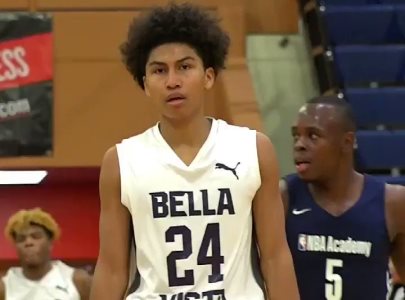 It was a big weekend for Bella Vista Prep talented 6-foot-3 junior guard Jeron Artest, as he helped lead his program to a National Championship victory in the Grind Session's National Tournament held in Kentucky over the weekend.  After a superb tournament performance, in which he played excellent defense and also scored the basketball nicely in the biggest games of the event, Artest has received another offer to his credit.

This weekend, Artest received an offer from UT-Martin after his strong performance in the event.  Artest already possesses offers from the University of Wyoming and also St. John's University.

Artest has not indicated any leaders in his college recruitment at this time, and after his terrific season-ending performance, Artest is now one of the state's hottest 2020 prospects.  Artest reclassified to the 2020 Class previously, since he is a younger prospect.  Artest also relocated to the Bella Vista program this season, after playing last season and partially this season with Hillcrest Prep.

The son of former NBA star forward Ron Artest, Artest is a bigger guard prospect that is capable of playing both guard positions on the floor, but he is at his best from the point guard position as a result of his strong handle of the basketball, excellent feel for the game and a unique ability to see the floor and find the open man.  He has a nice body with superb physical strength and improved athleticism.

In the tournament this weekend, Artest came up huge for his team, as he saved his best performance of his career for the end to the prep season.  While adjusting to the Bella Vista team for much of the season, and looking to find his role on a loaded ballclub, Artest waited his turn for an opportunity.  When he got it, it came at the right time for him and Bella Vista, as he raised his overall level of play on both ends of the floor.  In the tournament's semi-final win over a talented Prolific Prep (CA) team, Artest came up huge, as he finished the game with 20 points and locked up defensively.  Artest would earn the game's Most Valuable Player honor for his performance.

In the tournament's championship game against Spire Academy (OH), Artest would face his biggest test of his career - slowing down star 6-foot-6 senior guard Lamelo Ball.  In the contest, Artest would frustrate Ball, who would finish 5-for-15 shooting in the game.  Ball is still undecided as to which college he will attend next season, and if he even will cleared for eligibility by the NCAA.  Either way, the gifted guard prospect is one of the elite prospects that I saw in the country this high school season, and Artest's ability to defend Ball in the championship game this weekend was vital in his team's ability to bring home the national title.

Artest is definitely one of the elite guard prospects in Arizona's 2020 Class, and after his performance this weekend, he should receive much more attention from college programs looking for a gifted guard prospect that plays both ends of the floor and enjoys making players around him better.  He also has excellent work ethic and loves the game a great deal, combined with a great attitude - excellent attributes for a college prospect.

Arizona Hoop Review Scouting Report:  Artest  is a bigger point guard prospect with very good size for the position, and is also capable of playing as an off-guard as well.  He has grown a great deal physically over the past two years - adding some very good size and strength to his frame through hard work.  A very intriguing prospect that has an excellent feel for the game and an advanced overall skillet, that allows him to make plays for himself and others off the dribble.  He sees the floor very well and sees plays before they happen.  Has a high basketball IQ.  Has an excellent handle of the basketball.  A very good shooter with range on his shot and also a nice mid-range game as well.  An excellent defender that plays passing lanes and has very good toughness as a player.  A potential lock-down defender that accepts challenges.  The son of former NBA star player Ron Artest.  A player/prospect on the rise.