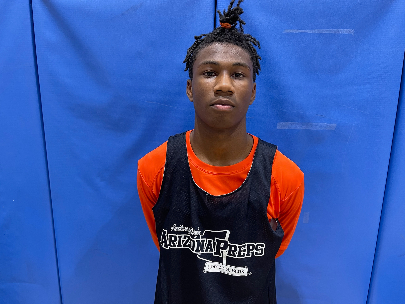 When we previously released the Arizona Preps 2023 Class Spring Individual Player Rankings, we knew there would be numerous prospects that make strong cases for themselves to be ranked higher in our next player rankings after the summer had eneded (2021). One of these prospects clearly is Tucson Pueblo High School's 5-foot-10, 150-pound gifted and athletic sophomore point guard Armari Carraway. One of the elite prospects in Arizona's talented 2023 Class of prospects, Carraway recently moved to the state of Arizona from Fresno, California, and immediately exploded during his sophomore season - posting tremendous individual numbers on the season. After a very strong performance in this month's Arizona Preps / Area Codes Showcase event, Carraway is one prospect on the rise in our next Arizona Preps Player Rankings for the 2023 Class.

"I'm a dog," said Carraway to Arizona Preps in an interview - suggesting that he goes hard and plays at a high level. Superior confidence for a mere sophomore prospect that can completely back it up.

Carraway is an alpha-male that leads any chance he gets. As a mere sophomore this young man poured in very impressive numbers - averaging eye-popping numbers on the season. Carraway led his team with 21.3 points, 3.4 assists and 2.4 steals per/game. These are excellent numbers for any senior prospect, and Carraway still has two years of high school remaining. He is already one of the state's elite young talents, so look out. This young man should become one of the elite guard prospects in the West for the 2023 Class.

Carraway resembles a young fighter and that of Floyd Weather, and he plays like it. He is tough and expects to be the best player on the floor whenever he takes the court. He knows he belongs and does not take a back seat to anyone. He is a floor general with the basketball in his hands and a facilitator that can score at a high level, which puts maximum pressure on opposing defenses. He pushes the basketball often up the floor, and is always looking to make a play off the dribble. An excellent ball handler and passer that sees the floor, and loves to create off the dribble - creating scoring opportunities for himself and his teammates. He is a very good shooter of the basketball with range, and has an explosive first step to blow past defenders and finish in the lane, which he does quite well over and around bigger defenders.

Carraway has the potential to become a lock-down defender over time as well. He has very quick hands and feet and plays passing lanes. A complete guard prospect that is fundamentally sound and plays electric on the floor with swag.

Currently, Carraway does not have a scholarship offer to his credit as of yet, but they are surely coming as he is a serious college prospect, and a nice Division-I prospect. It is still unclear as to what level of Division-I prospect he will become, but he has the tools to become a high major prospect i nthe manner he plays and produces.

I will keep a close eye on Carraway as he competes this summer, and bring you any recruiting updates for him as they begin to develop. This young man has definitely earned the right to see his ranking improve in our next Player Rankings.