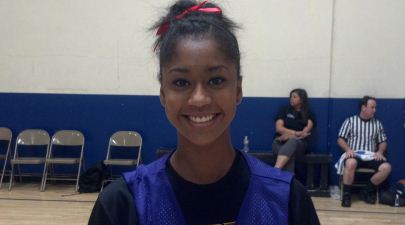 The state's top overall prospect in Arizona's 2015 class by our Arizona Preps' basketball staff is Mesa Mountain View High School's 5-foot-9 rising sophomore guard Armani Hawkins.  While we have Hawkins as our top prospect in the class, it is no secret to college coaches, as the ultra-talented girls' basketball prospect is already receiving loads of recruiting attention already.

Recently, while observing Hawkins in this year's All-Arizona Showcase event held recently at Deer Valley HS, I caught up with her father and he advised me that Arizona State University and head coach Charli Turner Thorne and her basketball staff have extended an offer to the younger Hawkins.  In fact, the offer was handed out while Hawkins was a mere eighth grader.

Hawkins older sister, Arnecia Hawkins, is currently entering her freshman season for the Sun Devils this season, after signing with the program during her senior year.

While it is still very early in the recruiting process for Hawkins, her emergence very early as a sure-fire elite high-major division-I prospect has propelled her already as one of the nation's top prospects in her class.

Last season as a freshman on a very loaded Mountain View HS team, Hawkins averaged 7.6 points per/game in limited action on a team that finished with an impressive 29-3 overall record in the state's top Division-I Class.  This season look for Hawkins to pick up her numbers a great deal in a much more demanding role for head coach Henry Bribiescas.

Hawkins is a smooth operator with the basketball in her hands, and is able to create a shot for herself or her teammates almost at will.  Her ability to handle the basketball amidst defensive pressure and get into the lane and finish are impressive, as is her ability to make players around her better.  She has a nice shooting stroke and an excellent mid-range game, which allows her to get anywhere she wants to on the floor.  She plays with a high level of confidence and has excellent court presence on the floor.

Hawkins was selected as the runner-up for Tournament Most Valuable Player at last year's 13th Annual Arizona Preps Girls Fall Showcase, after she turned in a strong perofrmance in the event.  Hawkins is also coming off an impressive summer performance - leading her Arizona Elite Gold club team to numerous wins on the club circuit.

Hawkins will team up this season with fellow 2015 stud performer, 5-foot-8 sophomore guard Sabrina Haines and also 6-foot-2 senior post Jordan Jensen (Iowa State commit) - giving the Toros one of the most talented line-ups in the state once again.  Look for Mesa Mountain View to make another run at a Division-I state championship during the 2012-2013 season.