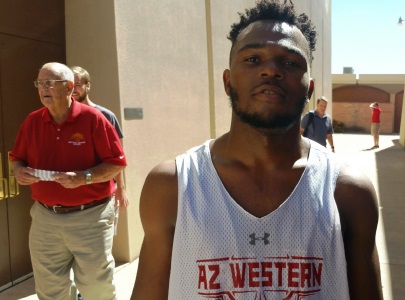 It was an exciting ACCAC junior college match-up Thursday evening between two of the top programs and teams in the conference.  With host Mesa Junior College (8-1, 4-1) undefeated in league play and Arizona Western looking to tie for the lead in the conference, it was set up a highly anticipated match-up, but the game would not live up to the hype.  Instead a depleted Arizona Western team would cruise to a road victory over a Mesa team that would struggle from the field all night.

Arizona Western (9-1, 4-1) would take a quick 12 to 6 lead in the contest, after two consecutive inside baskets by 6-foot-11 sophomore post Isaac Allen.  After two consecutives three-pointers from the corners of the floor by 6-foot freshman guard TJ Smith.

But Arizona Western would take numerous quick shots in the first half, allowing Mesa to get back in the game.  After a mid-range jumper from sophomore guard Obi Megwa, and a three-pointer from 6-foot-3 sophomore wing Michael Otin, Mesa would get back to within 4-points of AWC, 22-18.

Arizona Western 6-foot freshman guard Tyler Motley has been a spark for this team all season long - developing into one of the team's most consistent performers.  A three-point play by Motley would give Western back the game's momentum with 6:59 left to play in the first half.  A three-pointer as the shot-clock buzzer sounded by 6-foot-2 freshman guard Brandon McGhee, and then another long, bank-shot three-pointer by 6-foot sophomore guard Torin Webb, and Arizona Western would jump out to their biggest lead of the game, a 39-27, 12-point margin with 2 minutes left in the half.

Both teams would struggle from three-point distance in the first half, but Arizona Western would convert 53% from the field, and hold Mesa to a poor 39% from the field.

The second half would look much of the same for both teams as Arizona Western would lead the entire second half, and cruise to a 70-65 road win.

It was a wire-to-wire victory for the Matadors, scoring the first four points of the game and never looking back.  Arizona Western received a well-balanced scoring attack in the win, getting 31 points from their bench, compared to just 15 for Mesa.

Arizona Western was led by Tyler Motley's 14 points and 8 rebounds in the win.

Only two Thunderbirds scored in double-figures on the night.  Obi Megwa finished with a team-high 14 points, while sophomore forward Jamil Wilson-Jones scored 11.

Mesa will have a few weeks off before hosting the Fiesta Bowl Junior College Shootout December 28 - 30 on their campus.  All games will be played at Theo Heap Gymnasium.

The win is Arizona Western's third win in a row on the junior college season.