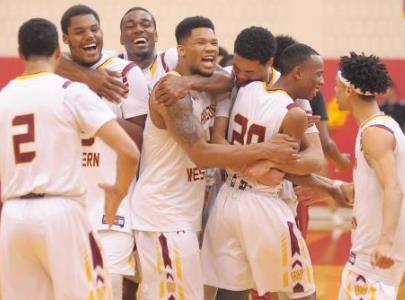 Arizona Western Junior College (23-9, 16-6) stayed in the hunt all season long in the Arizona Community College Athletic Conference (ACCAC), and then turned it on at the right time of the junior college season.  After reaching the semi-finals and blowing out Central Arizona Junior College (85-57), Arizona Western came right back on Monday evening in the tournament final - only to knock off Cochise College (74-63) for the ACCAC Division-I Conference Championship.

Arizona Western and Cochise are two of the top junior college programs in the country consistently over many years, and are both  definitely two elite programs in the ACCAC.  The two programs would fight it out for this year's Division-I Conference Title.

Cochise though would fight back hard and take a 19-8 lead with 8:36 left in the first half, after a 10-0 run.  Then Mahki Morris would take over the game for Cochise - scoring 10-straight points and giving Cochise a 7-point advantage, 34-27, with less than three minutes to go in the half.

Cochise would go into the half with a narrow 34-32 lead, after a strong finish to the half by Arizona Western.

With 7:02 left to play in the contest, 6-foot-6 high-producing sophomore forward Chaz Mack would give Cochise a 53-48 lead.

After a three-pointer from 6-foot-1 freshman guard Alfonso Plummer, and a Plummer assist to 6-foot-6 freshman forward Marvin Mapaga, Arizona Western would tie the game at 53 all.  With 4 minutes to go, 5-foot-11 sophomore guard Dajuan Beard would free himself up for a 18-foot jumper from the top of the key to put AWC up by five points, 58-53.

After consecutive three-pointers from Cochise’s Mahki Morris, which would narrow the lead by Arizona Western to one-point, 60-59,  Daryl Adams would knock down a trey with 2:45 to go.  After two free-throws by Adams, capping off a 13-0 run for AWC, Beard would steal the ball and find 6-foot-3 sophomore guard Brandon McGhee in transition for a layup and a 70-59 lead with a minute to go.  Plummer would score the final four points of the game for AWC to cap off the championship victory.

Plummer would finish the game with 13 points and four rebounds.  6-foot-5 sophomore forward Lamont Traylor was named the Region-I Tournament MVP, after finishing with 12 points and 8 rebounds in the final.  McGhee also contributed 10 points, 4 rebounds, 5 assists and 4 steals in the win.

Arizona Western will face Salt Lake Community College on Saturday for the District Final.  The winner of that game earns an automatic berth to the NJCAA National Tournament.