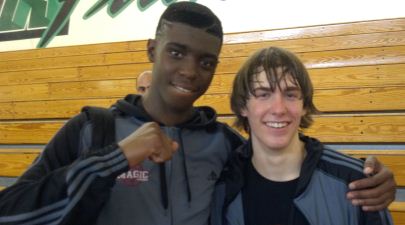 With the 2013 summer AAU/club  basketball season recently coming to a close, it has became very clear that the 2014 senior class is one of the most talent laded and deepest classes that Arizona boys basketball has had in a very long time.

Watching all of these top-caliber, future division-I players this summer was a treat to a new basketball writer like myself, but it also made it very difficult to narrow my list down to just the top 5 performers from this club season.

Here are the top 5 Arizona prospects that I personally saw, and impressed me the most this summer (In no ranking order) . . .

Cheatham started his freshman year at St. Mary’s HS as a relatively unknown prospect around the state, but will graduate from South Mountain HS as one of the best wing prospects on the West Coast, and the country as well.  Cheatham has a very fluent, confident, professional handle of the basketball, which makes it easy for him to bring the ball up the court, and set up the offense if the point guard is not able to - rare for someone his size.  He is also a very underrated passer, as I saw him set up several teammates for easy buckets as he ran the point guard position.

What sets Cheatham apart from other players his size is his extreme athleticism, which he uses on both the offensive and defensive side of the floor.  On offense, he uses his quick twitch off the floor to get easy second-chance put-back buckets, as well as grab rebounds and spray out to shooters.  He also is near impossible to guard when he is in the lane, due to his ability to jump over and around defenders, which often results in a highlight reel dunk, and "And-1" or him getting to the free throw line.

Defensively, he changes the game - utilizing his athleticism to alter and change every shot that comes his way.  He could be on the weak side and come over to rebound the ball or make the game saving block.

Zylan recently cut down his list of schools to 5 programs: Memphis, Washington, San Diego State, New Mexico, and Arizona State.  Cheatham plans to make a decision on what school he will attend on November 17th - his birthday

Dastrup was one of the most fundamentally sound players that I watched all summer long.  At 6-10, 225-pounds, he is a very strong, power post player who gets  a lot of his baskets off bullying his defenders or using finesse moves around the basket, such as a textbook left or right jump-hook from 10-feet in. He also uses his body very well to create position inside, and finishes most plays with a big-time dunk or an "And-1" basket.  I was also impressed that he has a very clean jump shot, which can extend out to the 3-point line, and he shoots it with confidence for someone his size.

Dastrup is also a very good defensive rebounder, as he gets his hand on most of the shots that come his way.  He is one of the best big men on the West Coast, and I hopefully will get to watch more of him as the high school season begins.

He recently narrowed his school list down to 7 schools, but he plans to take a 2-year Mormon mission before entering college.  His final schools are: UCLA, Arizona, Virginia, Ohio State, Florida, Kansas and BYU.

No one has seen their recruiting stock rise quicker this summer than Michael Humphrey did after turning in an all-star performance at the Reebok Breakout Camp ( Reebok All-American Camp) in Philly.  Humphrey is a great face-up post player who excels mostly from 15-feet and in.  He is great around the basket as he gets tons of second-chance put-backs, and is relentless on the boards until he gets the bucket or draws a foul.

Like Dastrup, Humphrey also alters and blocks every single shot that comes his way - resulting in low percentage shots for an offensive player and easy rebounds and transition outlets for the defense.  He also has a great jumper for a big that can extend out to the 3-point line, but is most effective at the elbow and from 15-feet and in.

Michael runs the floor very well and also finishes great in transition with put-back dunks and easy tip-ins.  He is also an outstanding rebounder of the basketball on both ends, as he uses his length and athleticism to get most rebounds - making it look as if the ball is just trying to find him after a missed shot.

Michael just narrowed down his laundry list of offers down to 13 schools, and plans to make a decision in the near future.  His list of schools includes:  Arizona, Arizona State, Virginia, UCLA, Vanderbilt, Stanford, Oregon, Indiana, Notre Dame, Grand Canyon, California and Columbia.

If I had to pick one player on this list to start my “Arizona Dream Team” with, Casey Benson would be that player.  Benson is a very strong, confident point guard who you really want running your team.  He always makes the correct decision, rarely makes a bad play and knocks down to open shot with ease.  Benson is a coach's dream and is one of the top pg’s on the West Coast.

Benson has a lighting quick release on his jumper, which does not take much time to get off at all.  He shoots it at a high clip from anywhere on the court  and hits a majority of his shots off of the dribble, due to his superb ability of creating space off the dribble, but also hits the spot up jumper when left open or his defender is sagging on him.

He is also a very strong finisher in transition and thrives off of the contact, scoring many "and-1" buckets, or drawing contact and converting at the free throw line.  He also has a great floater in the lane, which will be very useful next year in the Pac-12 to score over bigger defenders.  Benson also makes the offense run very smoothly, because of his leadership ability and trust that his teammates have in him that he is going to get them the ball, or do what it takes in order to win the game.

Benson recently gave a verbal commitment to the University of Oregon, and I feel he will be a very productive Pac-12 point guard when it is all said and done.

Pickens is one of the best shooters of the basketball in the state of Arizona and is widely considered one of the top shooters overall on the West Coast.  Using his great lift and release of the basketball, he shoots it at a extremely high clip from the 3-point line - even if his shots are well contested.  Pickens also is a solid slasher to the hoop, scoring off good back-door read cuts.  He has a solid frame, so once he is near the hoop he can bang thru a defender for the bucket or draw a foul.  He also has shown improved athleticism over the summer and is capable of throwing down a monster dunk on the break.

Pickens has not chosen a school but recently cut his list also down to 7 schools:  Stanford, Arizona State, Oklahoma State, UCLA, Gonzaga, Oregon and USC.

Overall, this was a very good summer of club basketball, and I feel that Arizona held its own in many national tournaments around the country.  This 2014 basketball class in the state of Arizona is a very special one, and I hope that Arizona begins to receive the recruiting attention and respect from the national scouts that is truly does deserve.