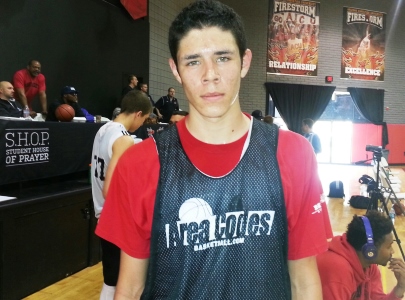 With the high school basketball season coming to a close this week, showcase events and club tournaments will now begin to take center stage throughout the spring and summer.  Event organizer Chad Groth has made showcase events and club tournaments his specialty, and he kicked off the spring season with this year's Arizona Spring Showcase last weekend on the campus of Arizona Christian University.

Arizona Preps was in attendance for last weekend's showcase event, alongside several other scouts and college coaches, which included top-rated national scout Jerry Mullens - one of the elite  basketball scouts of all time in America.

Chad Groth created a very nice atmosphere on the day for participants, staff and the scouts in attendance - providing an excellent hospitality area for everyone.

I was able to catch each of the games on the day.  Here are my top individual performers that I saw on the day from this year's event (In no particular order) . . .

- Aby was one of the top bright spots at this year's showcas event.  Coming off a strong senior season where he led his high school program to a state championship runner-up finish, Aby is a good looking wing prospect with a nice overall feel for the game.  He likes to have the basketball in his hands, and enjoys making plays for others.  He is a good ball handler and passser.  Good finisher.  Good mid-range shooter, but struggled in his consistency from longer ranges.  Has very good upside.  With hard work, Aby could really develop over time.  Received an offer at the event from Benedictine College and head coach Steve Schaffer.

- Morrow is intriguing as a college prospect.  He has good size and a nice body already.  He is still raw offensively, but has a good knack for the ball and is an active rebounder.  A capable shotblocker.  Runs the floor.  Solid post skills.  As he matures and develops, he should develop into a nice post prospect for a smaller college program.  With hard work, he could become a division-I prospect.  Has upside.  Good looking prospect that I will follow closely over the next year.

- Johnson is among the elite shooters of the basketball in Arizona's 2016 class.  He is coming off a strong junior season for himself and his high school program, and will look to gain some college attention this spring and summer.  Johnson has good size on his frame, and now just needs to add more physical size and thickness to his frame to reach his maximum potential as a player.  He has a quick realease with unlimited range.  A solid defender and rebounder.  Good ball handler with good court vision.  A good prospect for a smaller college program.

- Rodriguez is still developing a great deal, but he has serious promise and potential for the future as a college prospect.  A good looking young man with length and very good heigth for the wing position already, Rodriguez is an excellent shooter of the basketball with nice form and range on his shot.  He needs to do more on the basketball court though than just shoot, as he has the size to become a better rebounder and defender.  A good ball handler and passer.  OK finisher.  Needs to get physically stronger to become a serious college prospect, but he should become a division-I talent over time.

Narvarte (pictured) was one of the bright spots from the event - a good-sized post player with a long wingspan and a propensity to finish strong at the rim.  An active rebounder and shotblocker.  Left handed performer with solid footwork and post moves.  Plays much bigger than his size suggests.  Lives in Kingman, Arizona, so he was an unknown prospect until last weekend.  I like this young man's potential as a college prospect and his potential for the future.  With hard work, he should develop nicely over time and will make a smaller college program proud.  I will look to follow his development as a player over the next year very closely.

- Matulis is a very skilled guard prospect with serious potential as a player and a nice overall fell for the game.  He just plays and doesn't seem to even know how good he can become.  He is a complete player offensively with a nice shooting stroke with range, a very good handle of the basketball and excellent floor vision.  He is very thin physically and will need to add much more size to his thin frame to be able to seriously compete against better competition, but he has the intangibles as a player to become really good.  Just how serious he really is about the game will dictate his future.  Has very good athleticism and can finish above the rim.  A good looking prospect now.  The next year of development for him will be a key in his future potential.

- Arms is a high-energy guard prospect that plays all over the floor and produces a lot when he is out there.  He scores, defends and assists for his team.  Has nice length of body and a nice overall skill level.  A very good scorer, especially in transition where he flourishes.  Also has an excellent handle of the basketball.  A good looking guard prospect that will need a strong spring and summer this year to emerge among the better guard prospects in the class.

- Nyasa is a floor general-type point man with very good athleticism and overall aggression on the floor.  He is a very good scorer in transition and a slasher offensively.  Strong rebounder for his size.  Very good on-the-ball defender.  Good ball handler.  Solid passer.  Good overall competitor.

- Meadows has really developed over the years and I was impressed at how he has matured physically.  A nice combo-guard prospect with a good overall feel for the game and an ability to score the basketball.  Plays with superior confidence.  Has command-presence on the floor and likes to have the basketball in his hands, where he make plays for hismelf and others.  One of the better combo-guards in the class that I have seen.  Has good size on his frame and good physicall strength.  Should develop nicely over time.

- Dusell is a big-time prospect for the future.  Only a mere 7th grader, Dusell is one prospect that will become a household name over time.  Held his own against high school prospects o nthe day, and proved just how advanced he is at such a young age.  A slasher and open court player with a high skill level already.  Looks like he will grow a great deal over time, and become a serious high major prospect for the future.  Good defender.  Athletic performer with good body control.  Very bright future.

- A skilled forward prospect with excellent size for his age.  While he is still very raw offensively, Tillapaugh has grown physically early and towers over his classmates.  Has good toughness and good activity on the court.  Competes hard.  Will need to work on his proficiency of shooting the basketball from the perimeter, but his work ethic should make him a nice prospect over time.