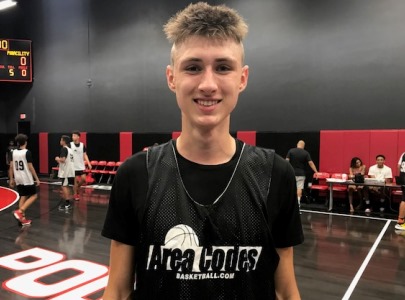 The 7th Annual Arizona Spring Showcase took place this weekend at The PHHacility, and included more than 60 different prospects in action for the event.  Tournament organizer Chad Groth of Area Codes Basketball, once again, organized this event, which included some of the state's top young prospects.

I was in attendance for this event, which kicked off the state's spring exposure events.  There were numerous top performers on the day.  Here are my top overall prospects that I observed on the day (In no particular order) . . .

Van Hammond was my top overall performer on the day, as he showed a much improved level of intensity and motor that led to some dominant play in the game's he participated in.  Van Hammond was all over the floor, rebounding outside of his area, playing inside and out and finishing very strong at the rim.  He scored at all three levels, which was very impressive for a prospect of his size and length.  He played inspired basketball - proving that he wants to be a very serious player.  Van Hammond is a long, lengthy forward prospect that can play inside and out, and also changes and blocks shots on the defensive end of the floor.  He runs the floor hard and is a very good finisher in transition, and also a good slasher.  A nice looking young prospect with a bright future.

Freeney excels in these type of events and he did exactly that once again, scoring the basketball from almost anywhere on the floor, and playing with a swag that most players do not possess.  This young man is electric with the basketball in his hands, and makes plays for himself and others, almost at will.  Freeney pushes the basketball up the floor to the open man on the floor, and plays at a high tempo and likes to make plays in the open court.  He makes shots with regularity from longer ranges amidst defensive pressure, and has unlimited range on his shot.  Gets into the lane quite often and is a good finisher.  While he can look for the big play sometimes too often, as he matures and learns how to control the tempo of the game over time, he will blossom into a special talent.  Has a bright future ahead of him.

An unsigned senior guard, Jones has steadily improved over the past several years that I have seen him perform.  I have been impressed with his development as a floor general over time, and he is no longer just a scorer of the basketball.  Showed he can run a team and make the right plays with the basketball in his hands.  Plays now a much better pace.  Makes good decisions with the basketball in his hands, and understands when to score at either of the three levels, or to penetrate and create for others.  A good penetrator and finisher in the lane.  A good defender with quick hands and feet, with the potential to become a lock-down defender with more focus.  A good sleeper prospect for a smaller college program or a stint in the junior college ranks.

King is a young prospect with a bright future ahead of him.  A very talented young scorer that is developing physically a great deal, and has a knack for scoring the basketball.  A good shooter with range that is at his best as a scorer, but is capable of playing both guard positions on the floor.  Has an ability to make plays for himself and others.  A good driver of the basketball and finisher in traffic.  A good scorer in the open floor.  An active rebounder for his size.  A good defender that plays passing lanes.  As he matures physically over time, he will really develop as a scorer.  Has the potential to develop over time physically into a 6-5 or 6-6 shooting guard prospect over time.  One of the state's top overall young prospects in the 2022 Class.

A skilled young point guard prospect with a good overall fundamental skill-set, that allows him to run a team efficiently, and also keeps defenses very honest with his ability to score the basketball and make shots from the perimeter.  Has a good shooting stroke with range on his shot.  A good penetrator and finisher in the lane.  A very good ball handler and passer that sees the open man on the floor.  Pushes the basketball up the court to the teammate.  A good defender that plays passing lanes.  As he matures physically, Cervantes should develop a great deal over time.  While he is unassuming as a player, he has excellent potential for the future.

Clapper is a skilled wing prospect with good size and versatility as a player.  A good shooter of the basketball with range, and is also able to put the basketball on the floor and finish strong at the rim.  Has a good mid-range game, and is capable of scoring in the post as well.  Has a good overall feel for the game.  A good ball handler for his size.  An active rebounder and finisher around the paint.  Runs the floor hard and gets in good position for offensive opportunities.  Has good upside as a player.  A good looking prospect.

Montoya is a strong and physical prospect that plays much bigger than his size suggests.  He is very strong physically and plays with good aggression on both ends of the floor.  Has good overall athleticism, suggesting that he would be good playing several different sports.  A good shooter of the basketball with range on his shot.  Can play either the 2 or 3 position on the floor.  An active rebounder that does not mind physical contact.  A strong finisher around the basket.  A solid ball handler and passer.  Runs the floor hard.  Plays with very good overall intensity.   Has good potential for the future.

Was very productive on the day on both ends of the floor.  A strong, well-built guard prospect that is capable of playing both guard positions on the floor.  Has a very strong, compact body that allows him to play physical and overpower opposing guards, especially in the paint.  A good shooter with range.  Scores effectively in the post as well.  A strong finisher for his size.  An active defender and rebounder.  Has good overall toughness as a young prospect, and is a true competitor.  Has very good potential for the future.

Pohl is a long and rangy post prospect with very good size and potential for the future.  He is still growing a great deal into his long frame and has big hands and feet, that will catch up to him over time.  He runs the floor well for his size and at a young age.  A solid finisher around the paint and has a good jump hook.  A good rebounder that keeps the basketball up high and finishes well around the paint.  A capable shotblocker.  Has unlimited potential at a very young age, and should develop nicely over time into a serious post prospect.  Has a bright future, it will just depend on how hard he continues to work.

A skilled guard prospect that is capable of playing both guard positions on the floor, but is at his best as a lead guard.  A good ball handler and passer that sees the floor.  Pushes the basketball up the floor, and is a good scorer and finisher in the open floor.  A very good on-the-ball defender with quick hands and feet.  An active rebounder for his size that plays bigger than his size suggests.  A solid shooter with range, but at his best from mid-range or while driving and finishing at the basket.  A solid overall guard prospect.