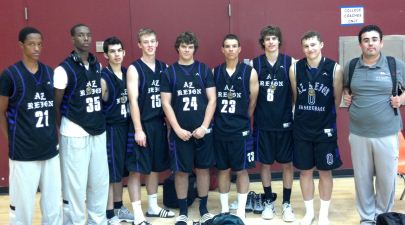 Arizona Reign head coach Fabian Valladolid has had his team together since they were each in the sixth grade, and it proved to be a major factor in his team's qwest for a tournament championship this weekend, as the 17U version of the Arizona Reign would defeat the Arizona Magic Seniors, 66-58, for the consolation championship of this year's 2012 Double Pump Best Buy Challenge Hoop Fest in California this weekend.

It was an all-Arizona final, as two of the state's top club teams met in the consolation championship of this weekend's event - an exciting finish for Arizona fans in attendance.

Gilbert High School's 6-foot-3 junior guard Conner Helvig came up very big in this weekend's event for the Reign, as Helvig proved that he is among the state's top talents in Arizona's 2013 class.  An almost unknown prospect among the class before this weekend's event, Helvig was a player possesed in hsi performance this weekend - handling the basketball at a high level and making plays for himself and others almost at will.  Helvig made players around him better and led his team to the big tournament victory.

The Reign were also led by the play of Gilbert HS 6-foot-2 senior guard Erik Crawford in the tournament win.  Crawford is a very nice sleeper prospect that has turned in several big performances this spring and is still an unsigned senior prospect, but worthy of some serious attention.

"They are under the radar, but we came to play and will compete against anyone that steps on the floor," said Arizona Reign head coach Fabian Valladolid.

Congratulations to the each of the members and coaching staffs of both of these two teams on representing the state of Arizona in a big way in a major event this weekend.