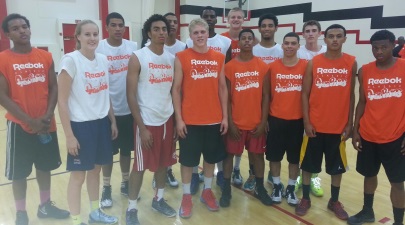 The Arizona Reebok Classic Open Run took place on Sunday, May 12th, 2013 at Glendale Community College.  Registration was open to all high school basketball players, in an attempt to name the invitees from the state of Arizona for this year's annual Reebok Classic Breakout Camp, which will be held this summer in Philadelphia on July 9-12th.

The Reebok Classic Breakout Camp features more than 100 of the nation's elite prospects, and is held during the NCAA evaluation period on the campus of the University of Philadelphia in front of more than 400 college coaches from across the country.

The Reebok Classic Breakout Try Outs will take place in 13 locations throughout the country this spring, with many of them being held this month.  Each try-out camp will be held in their respective parts of the country to select the top performers from each camp for the annual camp held in Philadelphia, PA.

"The UCONN staff told her that they want her playing against boys as much as possible," said St. Mary's HS head coach Curtis Ekmark after the event.  Ekmark's son,  Andrew Ekmark, a top-rated freshman guard from Phoenix Country Day also participated in the event and played very well throughout the day.

Courtney Ekmark played very strong during the day and was among the finalists for the selection to the big camp.  While the camp does not include girls prospects, Ekmark still made a strong case for herself in Sunday's event.

The day's action included drills and instruction from West Valley based-trainer Gino Crump and the Glendale Junior College men's basketball staff, which included GCC assistant coaches Simon Phipps and Jon Ziri.  After putting the campers through drills, games were played to help with the selection process.

After the day's games, finalists were selected from the event's action to help with the final selection process.  We will announce this year's invitees for the annual prestigious Reebok Classic Breakout Camp later today.

We sincerely appreciate each of the camp participants that came out this year, as it was a day filled with excitement and excellent energy.  Good luck to each of the finalists and stay tuned for our selections later today.